Jasper Wiese in trouble after yellow card against Wallabies

The Springbok loose forward was found to have illegally cleaned out a player at a ruck. 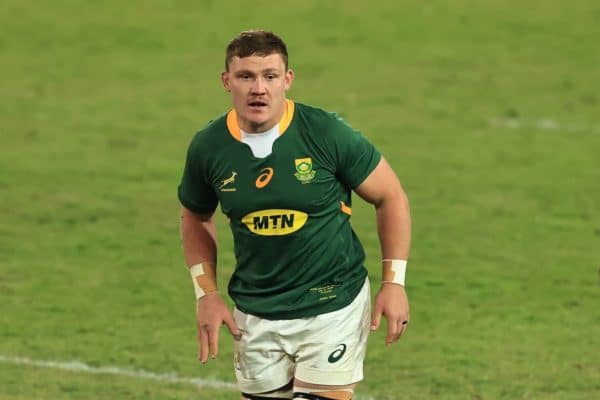 Jasper Wiese has been told to appear before a judicial hearing following his yellow card against Australia. Picture: David Rogers/Getty Images

The newest member of the Bok back-row has been cited for foul play in last Saturday’s Rugby Championship loss to the Wallabies in Brisbane. And the Boks are up against the All Blacks this weekend, with the team announcement due on Tuesday.

Wiese, who replaced Duane Vermeulen late on in the match, was yellow carded for an illegal clean-out at a ruck.

It has since been found that the offence warranted a red card and Wiese has been called to a disciplinary hearing.

“Wiese is alleged to have contravened Law 9.12: a player must not physically abuse anyone, during the match between Australia and South Africa at Suncorp Stadium in Brisbane on 18 September 2021.

“The referee for the match, Matthew Carley, issued a Yellow Card for the incident which occurred in the 78th minute.

“Upon further review of the match footage, the Citing Commissioner deemed in his opinion the incident had met the Red Card threshold for foul play.

“The Judicial Committee for the Hearing will be Michael Heron QC (Chair), Helen Morgan and Chris Smith which will be held by video conference on Tuesday 21 September 2021.”