The men from the Cape hit back in an excellent second half, keeping their hosts scoreless. 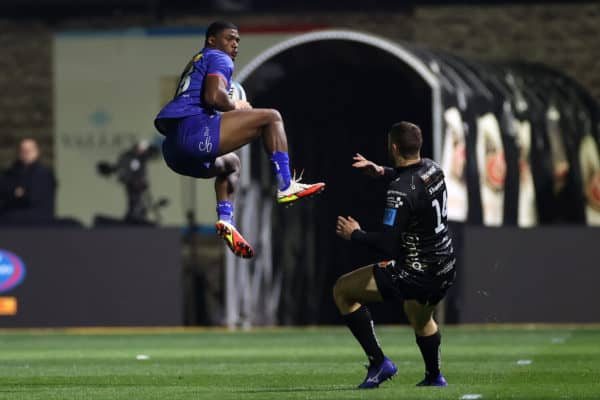 Warrick Gelant of the Stormers catches the ball during his team's URC win against the Dragons in Wales on Friday. Picture: Chris Fairweather/Huw Evans Agency/Gallo Images

The Stormers ended their first European tour in the United Rugby Championship on a high with a come from behind 24-10 win over the Dragons at Rodney Parade Park in Newport on Friday evening.

It ended a tour that saw them get better in each game after losing badly to Benetton, giving Munster a run for their money and then drawing with Edinburgh, before claiming a well deserved win against the Dragons.

The visitors showed tremendous character to overturn a 10-9 deficit at halftime and for the second week in a row completely hold the home side scoreless in the second half to pick up the result.

The ever impressing Warrick Gelant put in a top performance and was duly awarded the man of the match award, while wing Leolin Zas made a telling contribution scoring both second half tries to help the Stormers get over the line.

“We are very happy, it’s the end of our tour, we wanted to end with a win and luckily we got it today,” said Gelant after the match.

“It’s been a tough tour, but it’s been a process for us, a bunch of young guys coming together nicely for us, so it’s good to get the learning done while winning.

In the match the Stormers got off to a decent start and took a 3-0 lead thanks to a penalty from flyhalf Manie Libbok, before a yellow card to captain Salmaan Moerat for a high tackle saw the Dragons hit back.

The Dragons took their opportunity with a man advantage to move into a 10-3 lead as a grubber from flyhalf Sam Davies allowed fullback Josh Lewis to dot down a seven pointer, while Davies added a penalty.

Two penalties from the boot of Libbok however made it a one point game at the break, with the Stormers then pulling away in the second half.

First Libbok grubbered through for Zas to score an unconverted try, before slotting a penalty and then with Dragons on attack in the Stormers 22m they lost the ball with Zas hacking the ball into their 22m, only for their cover defence to miss the ball, allowing Zas to pick up and score to seal the win.

“We always knew it was going to be ugly at the start, it was quite a territorial battle in the first half. We knew if we could stay with them in the first 40 with our kicking game the second half would open up for us to play our game,” explained Gelant.