The former South African national team's scrum coach is now in charge of the Scotland set-piece. 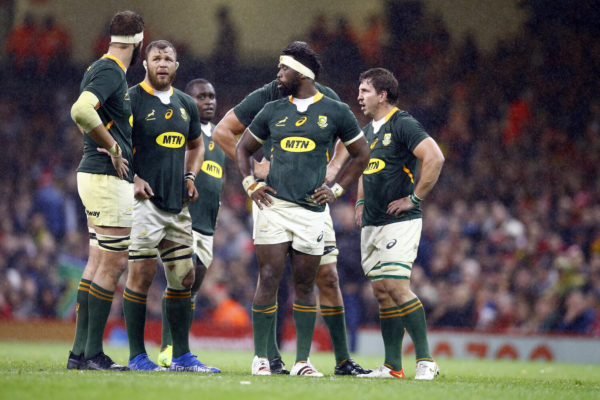 The Springbok scrum functioned well against Wales in Cardiff last Saturday, but they face a bigger test this weekend against Scotland. Picture: Steve Haag/Gallo Images

After completely dominating Wales in the scrum battle over the past weekend the Springboks are now looking ahead to a much tougher scrum test when they take on Scotland at Edinburgh in their second match of the end-of-year tour.

The Scottish pack is expected to produce a sterner test of the Boks’ scrumming potential and proved their worth with a strong showing in their win over Australia on Sunday.

“If you look at the performance of Scotland against Australia they put up a very good scrum performance,” admitted Bok forwards coach Deon Davids on Monday.

“Obviously we also know of the coaching ability of their scrum coach Pieter de Villiers … he’s been with the Springboks previously and he worked with me at U20 level, so he’s a very good coach and you can see that result in what they achieve in their scrums.

ALSO READ: Frans Steyn playing every Bok game like it could be his last

Having beaten Australia, who the Boks lost to twice in the Rugby Championship, Scotland are set to pose a tougher challenge on Saturday than Wales did.

Particularly with their x-factor players like flyhalf Finn Russell, who impressed when he replaced the injured Dan Biggar in the final British and Irish Lions Test against the Boks in July and he could prove to be a game changer for the hosts.

“We respect Finn Russell and the other players in the Scotland team, but we are not focussing on one particular player,” explained Davids.

“Our main focus is on where we can improve, what we can do better this weekend and understanding the challenge that Scotland will bring.

“So we are going to need a collective and improved effort from the team if we want to be successful in the match this coming weekend.”