England outscored the South Africans three tries to one in London on Saturday to avenge their loss in the World Cup final of 2019. 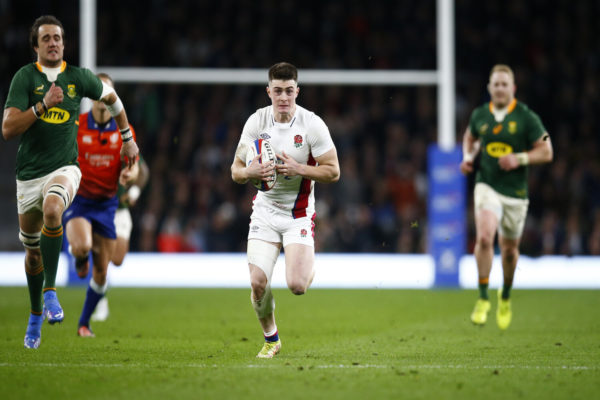 Replacement scrumhalf Raffi Quirke of England charges ahead for a try against South Africa at Twickenham on Saturday. Picture: Steve Haag/Gallo Images

The Springboks finished their end-of-year-tour on a bitterly disappointing note as they were edged 27-26 (halftime 17-12) by England at Twickenham on Saturday afternoon, thanks to a last minute penalty from flyhalf Marcus Smith.

It was a game of two halves with the hosts dominating the first half with some solid running play to deservedly lead at the break before the Boks came storming back the second half led by a massive forward effort only to finish just short.

In the end the visitors will point to three missed shots at goal, two penalty attempts by flyhalf Handre Pollard and one missed conversion from replacement Elton Jantjies that cost them, while a few scoring opportunities were also left out there by the Boks.

It was a poor first half from the Boks, particularly in the opening 25 minutes, and they were perhaps lucky to be just five points down at the break.

England got off to a flying start as they chose to kick a penalty in the Bok 22m to touch, where the secured the line out and swung the ball across the field to the right hand touch and then back to the left where inside centre Manu Tuilagi went over in the corner.

Flyhalf Smith slotted the touchline conversion to put them up 7-0 after seven minutes, although Tuilagi was injured in scoring the try and hobbled off to be replaced by wing Max Malins, as England shuffled their backline with Joe Marchant moving to outside centre and Henry Slade inside.

Pollard then reduced the deficit with his first penalty in the 14th minute, only for England to respond with their second try four minutes later.

From a scrum just in the Boks half England swung the ball, with a skip pass seeing Malins make the initial into the Bok 22m, where he was stopped just short, only for the ball to be popped to fullback Freddie Steward on the charge to power over in the right hand corner.

Another touchline conversion from Smith made it 14-3, before Pollard again cut the deficit with his second penalty four minutes later.

The Boks were then pinged for sealing the ball in the 24th minute on the 22m in front of the posts, with Smith slotting the three point, however two penalties at the breakdown against England in the 26th and 30th minutes allowed Pollard to keep the points ticking as he brought the Boks to within a try at 17-12.

England then had a late chance to score but just ended up short, before Smith tried a drop goal attempt just before the end of the half but saw it go wide.

The second half then saw the Bok revival led by the pack as two early scrum penalties on England put ins set the tone for a difficult half for the hosts pack.

However the dominance coincided with Pollard’s boot going cold as he missed kickable penalties in the 44th and 48th minutes, before he finally knocked one over from dead in front in England’s 22m after they infringed at the breakdown in the 55th minute.

Four minutes later the Boks came desperately close to scoring as flank Kwagga Smith was held up over the line, with the England try line drop out then landing in Frans Steyn’s hands as he went for an ambitious drop goal from near the 10m line only to see it drift just wide.

The Boks then chose to go for touch on two occasions from kickable penalties, with England defending the subsequent mauls, before replacement flyhalf Jantjies gave the visitors the lead with an easy penalty in front in the 64th minute.

However England then hit straight back out of nowhere two minutes later from a line out near the halfway, as Joe Marchant was put into a hole and offloaded to replacement scrumhalf Raffi Quirke to dive over for a converted score and put them back in front 24-18.

England’s poor discipline then finally came back to bit them as after eight consecutive penalties against them replacement lock Will Stuart was sent to the sin bin after coming in on a maul from the side.

The Boks then capatalised on the extra man in the 70th minute, kicking a penalty into England’s 22m, getting a good maul roling but being stopped short, before swinging the ball to the left wing where Makazole Mapimpi went over in the corner untouched, while Jantjies missed the tough conversion to give them the lead.

However three minutes later Frans Steyn powered over a long range penalty to put the Boks ahead by two points, only for Smith to break their hearts with a last gasp penalty after a frantic finish also saw Bok captain Siya Kolisi yellow carded for playing a man in the air with three minutes to go.

Will it be derby December for SA's URC teams?
2 hours ago
2 hours ago

Will it be derby December for SA's URC teams?
2 hours ago
2 hours ago