After a brilliant final in front of a sold out crowd of around 13,000 passionate fans at Griqua Park in Kimberley, it showed that the Currie Cup is alive and kicking. 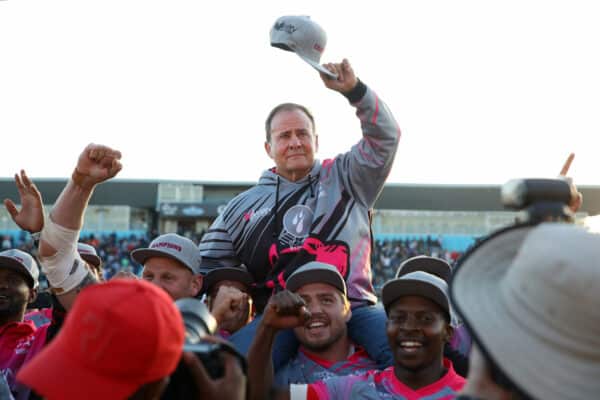 Victorious Pumas coach Jimmy Stonehouse is carried on the shoulders of his players after they beat the Griquas in the Currie Cup final on Saturday. Picture: EJ Langner/Gallo Images

“The Currie Cup doesn’t belong in a museum.” That was the roar of victorious Pumas coach Jimmy Stonehouse after his charges completed a remarkable season by claiming a first ever Currie Cup title by beating the Griquas in the final on Saturday.

After the Griquas beat the Bulls in the semifinal, losing coach Gert Smal, suffering from a serious bout of sour grapes, claimed that the competition in its current form should be consigned to a museum.

However, after a brilliant final in front of a sold out crowd of around 13,000 passionate fans at Griqua Park in Kimberley, it showed that the Currie Cup is alive and kicking, especially for the smaller unions who made history in battling out the landmark final.

“I think we played brilliant rugby. Discipline again counted against us, the penalty count was very high. But I think we scored a number of tries which is amazing for a final. We said in the beginning that we were going to go for the tries and it worked out at the end of the day,” said Stonehouse.

“These teams playing in the final was the first bit of history, the cherry on the cake was just winning this game. I love the Pumas and I am glad we could win it.”

An almost despondent Griquas captain Sango Xamlashe, who had the massive task of stepping into the shoes of regular captain Niel Otto who missed out on the final due to concussion, admitted that his side were just second best on the day.

“We always knew it was going to be a tough outing for us today. I think the Pumas came out with a lot of fire, and I think we were only good in some moments of the game. It’s obviously a learning curve for most of us being our first Currie Cup final,” said Xamlashe.

“I don’t think we were the better team today, big ups to the Pumas. I think they came out from the first minute and played to the last and they really showed that they wanted this trophy.”

An elated Pumas captain Willie Engelbrecht struggled to put into words exactly what the win meant to him when interviewed on the side of the field after the game, but had composed himself by the time they received their medals.

“The emotions are out now and I (finally) get to lift this beautiful trophy. I have this awesome team and coaching staff behind me. I have the worlds respect for these guys behind me and I couldn’t have done any of these things without them,” said Engelbrecht.

“He (Stonehouse) has been immense. That man gave me my second lifeline. He’s given a lot of people their second lifeline. If it wasn’t for him a lot of these guys behind me wouldn’t have been here or been playing rugby anymore.

“So I have massive respect for coach Jimmy and I think all of the guys behind me can agree with that.”