Overexcited players will not make Chiefs team for Telkom semis

Kaizer Chiefs coach, Ernst Middendorp says players that are already thinking ahead to the final of the Telkom Knockout will not be in his team when they play Maritzburg United in the semifinals on Sunday. 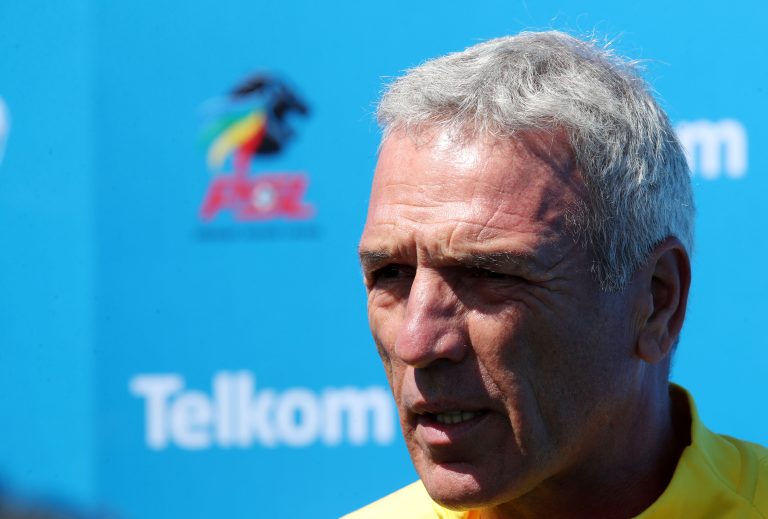 With Amakhosi buzzing this season, there is a general expectation that they will easily see the Team of Choice off and book their ticket to Durban where the final will take place at Moses Mabhida Stadium on December 14.

A number of Amakhosi fans have already made arrangements for the final with some posting on social networks that they have booked flights and made accommodation bookings.

But Middendorp doesn’t want that same excitement to get into his team as he wants them to focus on their game against Maritzburg then the league games that follow before the final.

“If I see this, then you will not see a lot of other players on the field at the weekend,” said Middendorp on Thursday morning in Naturena. “If I see this at training today or tomorrow or Saturday, you can be 100% sure that this type of players will not be on the field for this game on Sunday, if we have the impression that’s the case,” said the German mentor.

Middendorp also said that winning the cup – which will be a first in four years for the Glamour Boys – was not about him but the entire team has to want it.

“It’s not about me. It’s about the club altogether to take it on this level. This is something that has to be highlighted, it is very crucial that we understand that, as a player each individual has a contribution.

“We highlighted this during our meetings this week. Sometimes it is nice to be top of the league but the more difficult job that comes now is to stay there. You have to do even more. Be more prepared. You have to do whatever it is possible to challenge yourself.

“There is always something… if you are progressing is always on the edge. But if you are sitting on a position and you are saying now let’s relax, no, you have to challenge each and everybody, each member of management, each member of the team, each player… It doesn’t make you a lovable person because you are causing a little bit of stress, but that’s what we have to do. We have to be more and better prepared. We have to fight for our better preparation. Just for example to make everybody aware about it to be comfortable. That’s what we are doing, we are challenging ourselves,” said Middendorp.

He said there was a some resistance when he proposed that the team go to Nelspruit on Friday morning so that they can put in some training sessions  before Sunday’s game but his will was granted as management understood the importance of being fully prepared.