The Swallows striker came off the bench to great effect in the Cosafa Cup clash with Botswana. 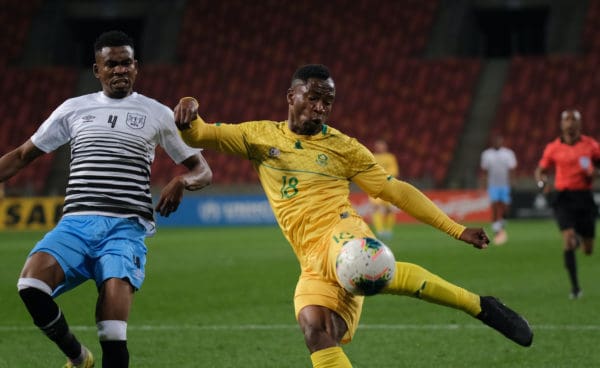 Kagiso Malinga (R) fired in the only goal of the game. Picture: Michael Sheehan/Gallo Images.

Moroka Swallows striker Kagiso Malinga’s fine second half finish was enough to give Bafana Bafana. a 1-0 victory over Botswana in the opening match of their Cosafa Cup campaign at the Nelson Mandela Bay Stadium in Port Elizabeth on Tuesday.

A South African team that had been hit by plenty of withdrawals ahead of the tournament, and that was also missing head coach Helman Mkhalele, after he was forced to isolate following a positive Covid-19 test, didn’t have it all their own way against Botswana, who hit the woodwork shortly before Malinga’s strike.

Bafana were coached by Morena Ramoreboli in the absence of Mkhalele, and were captained by AmaZulu goalkeeper Veli Mothwa, also making his Bafana debut, and who showed his enthusiasm by racing all the way up the pitch to celebrate with his teammates when Malinga struck.

Mothwa’s AmaZulu teammate Siyethemba Sithebe was also handed a start, as was TS Galaxy’s Ethan Brooks, who had made an impressive debut in a 3-2 friendly win against Uganda in June.

The decisive goal, in a match of few chances, came in the 67th minute, as Malinga, just 11 minutes after coming on, ran onto a through ball and drilled a volley from a narrow angle past Ezekiel Morake and into the far corner of the net.

Morake might have done better but it was still a well-placed strike, and sets Bafana up nicely in a competition they have failed to meet expectations in for some time.