Mosimane says the defending champions have been to Atteridgeville far too many times and should be somewhat accustomed to the pitch and the environment. 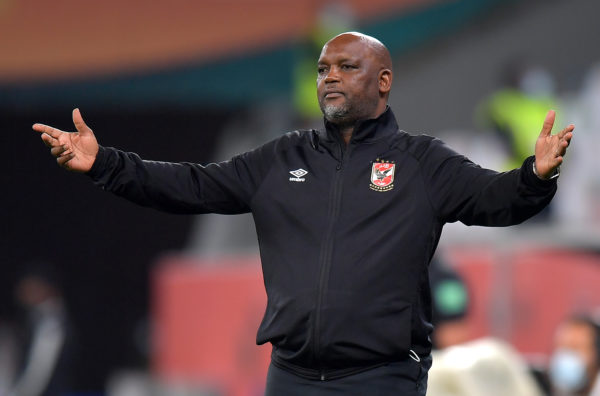 Pitso Mosimane has insisted that his Al Ahly side cannot make any excuses on Saturday when they visit the Lucas Moripe Stadium to take on his former Mamelodi Sundowns in the return leg of the Caf Champions League quarterfinal.

Mosimane says the defending champions have been to Atteridgeville far too many times and should be somewhat accustomed to the pitch and the environment as Downs took them to the same venue in the last two seasons, one of which they were thumped 5-0 in 2019.

“Al Ahly have been to Lucas Moripe, it will be the third time, the pitch is always okay, there is no issue. The weather is not that bad, yes, it is a bit warm in Egypt but it is not that cold in South Africa, it is not winter yet, we have no excuses,” said Mosimane.

He admitted that he was overcome by emotion in the first-leg where the Red Devils won 2-0 and now that that is out of the way, Ahly need to make sure they wrap up the tie before heading to Qatar to play Confederation Cup holders RS Berkane of Morocco in the Caf Super Cup.

“It (the first-leg) was mixed emotions, we played the first match and we broke the ice so now it is okay,” he said.

“The win is an advantage because we have the edge but it is half time when you are leading 2-0, it does not mean anything. Football is football, how many times have we gone down 2-0 at half-time and we won the match 3-2, so it is a small advantage and it gives you a little bit of confidence and puts pressure on the opposition.”

“Jingles” added: “We are going directly to Qatar from here for the Super Cup, we have big games even though there are few days in between but it is our lives, we play every three days.”