The victory wasn’t enough to see Bucs go on to finish the season in second place after AmaZulu FC won against Swallows FC to take their points tally to 53 with only one game left. 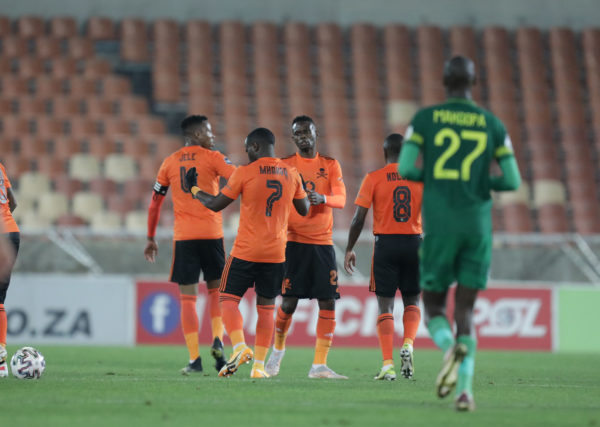 Terrence Dzukamanja helped Orlando Pirates edge Baroka FC 2-1 after coming on as a substitute at the new Peter Mokaba Stadium on Wednesday night.

But, the victory wasn’t enough to see Bucs go on to finish the season in second place after AmaZulu FC won against Swallows FC to take their points tally to 53 with only one game left.

Pirates, who are on 49 points can only go on to finish their campaign with 52 points if they win their last match.
But, Bucs jumped to third place on the log, meaning they can context for the Caf Confederation spot along with Arrows, who lost to Kaizer Chiefs on the day.

In their clash with Baroka, the sides started slow, but there were a few chances.

Baroka’s Manuel Kambala had the home side’s first shot at goals in the ninth minute, but his shot went over the bar.

A good chance came in for Pirates with Thembinkosi Lorch in the 26th minute after he found himself inside the box needing only to beat the defender and take a shot, but instead, the winger decided to make a pass leaving the Baroka back four to intercept the ball.

The Buccaneers were then forced to make a substitution after Ben Motshwari was struggling with a stomach bug and was replaced by Fortune Makaringe.

Makaringe almost made an immediate impact after his pass to the right side of the Bucs found Wayde Jooste overlapping, before crossing the ball into the box for Gabadinho Mhango, but the Malawian couldn’t connect with the ball.

Things would get much interesting as the game was about to approach half-time with Denwin Farmer putting the Limpopo outfit in the lead.

But, Baroka’a celebrations were cut short as Mhango equalised from a well taken free-kick leaving the sides to go into the break level on 1-1.

The second half saw Bucs start stronger with two chances inside 10 minutes, but his attempts didn’t result into goals.

Baroka also came close to taking the lead in the 67th minutes, but Siphesihle Ndlovu made an important block to deny the home side.

In a similar fashion as in the first half, Jooste once again provided with pass into the box, but Mhango failed once again to tap it into the back of the net with less than 10 minutes of regular time remaining.

Bucs were eventually saved by last minutes substitute Dzukamanja, who scored with his head in the 88th minute to give Bucs the all important points.