“It was a game that you were not sure what to expect before it started because of the things that were happening," admits the Chippa coach. 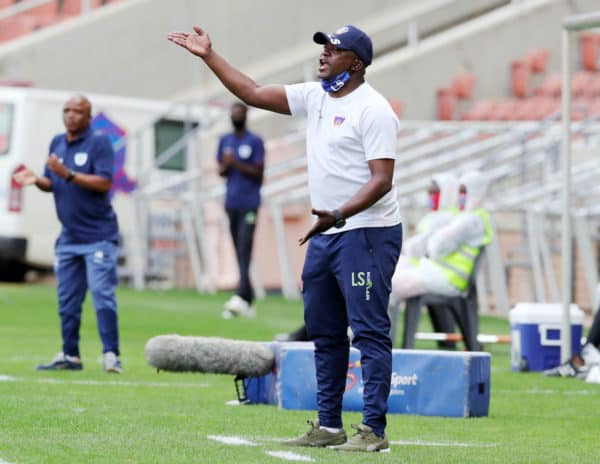 Lehlohonolo Seema was happy to get a first win in the playoffs, in difficult circumstances. Picture: Samuel Shivambu/BackpagePix.

ALSO READ: PSL defiant as playoffs kick off despite Royal AM protests

The clubs were given the green light to play just two hours before kick-off by the Premier Soccer League and Chippa coach, Lehlohonolo Seema has admitted that it was a tricky match.

“It was a game that you were not sure what to expect before it started because of the things that were happening. We were not sure when we would play… we were playing by the ear, listening to when we might get to play,” said Seema after the game.

“But I must complement the players from both sides because it was not easy to prepare for this game. We tried. We had a slow start but that was understandable. Experience saw us through, they are a determined side, and you can see that they will be different in the second leg,” added Seema.

The games were supposed to kick off a week earlier but were interdicted by Royal AM following their pending appeal against a high court ruling that declared Sekhukhune United as the winners of the GladAfrica Championship.

They lost the appeal on Friday, and the PSL were advised that the interdict had fallen away and the games can resume.

“We did ourselves a favour by winning this game at home. It is more about mental strength than anything else at this time. We are happy that we played the game and got the three points. We are glad that the first game is over. We will get to prepare better for the second one,” said Seema.

According to the fixture, the Chilli Boys are set to play Royal AM at Chatsworth Stadium on Tuesday afternoon. It washowever not clear if the game would go ahead, with Royal AM expected to try and get another interdict yesterday. They reportedly filed another appeal with the Supreme Court of Appeal on Friday.