Matsatsantsa have now suffered two consecutive defeats in the League. 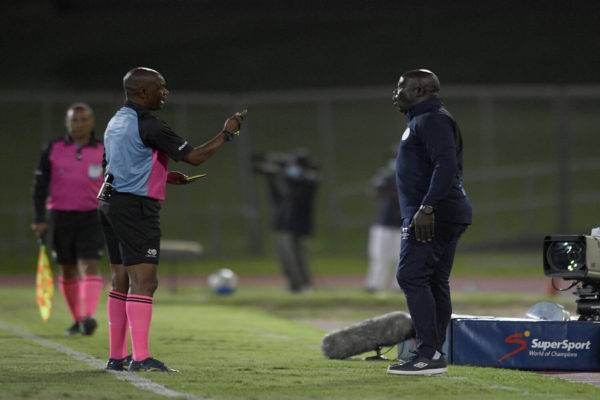 Kaitano Tembo of Supersport United reacting on the touchline as his side suffered a 2-1 loss to Royal AM. Picture: Sydney Mahlangu/BackpagePix

When Victor Hungwani blew his whistle to signal the end of the DStv Premiership tie between Royal AM and SuperSport United on Tuesday evening, John Maduka and the rest of the Royal bench jumped up for joy and ran on to the pitch in jubilation, you would swear they’d won a trophy.

But their joy is justifiable as they fought back from a goal down to beat United 2-1, scoring those two goals in about two minutes to condemn a 10-man Matsatsantsa A Pitori side to a second successive defeat as they lost to Kaizer Chiefs last time out.

However, Maduka was not impressed with his side’s showing, particularly from the onset where United placed them on the back-foot and had them chasing shadows.

“It was a good game at the end but we did not start the game well, we started very slow and lost possession, we gave the ball away so cheaply and we were not functioning going forward. We did not play like ourselves, we ended up playing like them and we played some long balls which is not our identity.

“We were not patient enough. I told them at the start of the second half to be patient and play our game and the goals will come. We improved and did well even before they got a red card,” said Maduka.

The Man-of-the-Match came from Kaitano Tembo as Thamsanqa Gabuza’s goal and performance were enough to see him walk away with the gong. That on its own is an indication that the capital did not play badly, but suffered from being a man-down when Luke Fleurs was sent off in the 60th minute – something that really annoyed the United mentor.

“The game changed when Luke got booked for a stupid thing. He threw the ball away knowing that he was on a yellow card. For me, that is the moment that changed everything and I am very disappointed in that.

“They then had nothing to lose because they were just throwing numbers and we defended very well, it was only in the last two minutes where we could not hold on. There was a lot of panicking and not clearing the ball well, but in terms of performance we did well,” said Tembo.