Classy Sundowns demolish Gallants to stretch lead at the summit

Unscored, unbeaten so far, Masandawana are now five points clear at the top of the log. 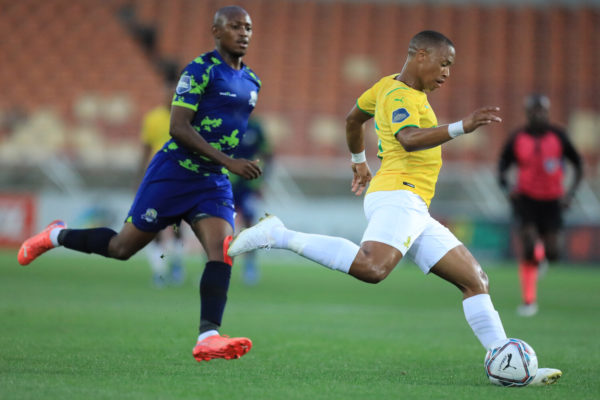 In what was a true depiction of the biblical story of David versus Goliath, Mamelodi Sundowns were paired with DStv Premiership rookies Marumo Gallants, but the story did not turn out quote like how it played out in the book of Samuel as Sundowns came out on top against the Venda-based side.

Downs beat Xaniseka Mdaka’s side 4-0 in what was another brilliant Peter Shalulile display as the Namibian netted a brace.

The first goal, however, was created from what looked like a training pitch drill which Themba Zwane finished off spectacularly 24 minutes into the game. The move was instigated on the right flank and Peter Shalulile got the assist, teeing up “Mshishi” for his second goal of the season.

Downs could have gone to the break with a better advantage when Man-of-the-Match Neo Maema benefitted from the industrious Pavol Safranko. The lengthy striker burst with pace on the left flank to find Maema, who used his trickery to lose his markers before unleashing a shot towards Washington Arubi’s goal but only found the upright.

Masandawana were in full control after the half-time team talk but Gallants did have moments of their own, such as when Thabo Mnyamane had an opportunity to level matters in the 75th minute from a free-kick within close range.

The former SuperSport United winger made his name in the top-flight with his textbook freekick scoring ability, but this time he could not keep his effort on target as goalkeeper Reyaad Pieterse was happy to see it fly into the stands of the Thohoyandou Stadium.

Downs launched waves of attack until they eventually added to their tally. It was none other than Shalulile who got the second in the 78th minute before netting the cherry on top in the stoppage time, leapfrogging Victor Letsoalo in the race for the Lesley Manyathela Golden Boot going. Safranko also got his name on the score sheet in the dying moments of the game as he profited from poor goalkeeping by Arubi.

In other affairs in the league on Sunday, Sekhukhune brought Swallows FC to their knees with a 1-0 win in Dobsonville, while Royal AM and Chippa United could not make the most of their home ground advantages as they were held to 1-1 and 0-0 draws by Baroka FC and Maritzburg United. Benni McCarthy’s side had some joy against his former side Cape Town City, who AmaZulu beat 2-0.