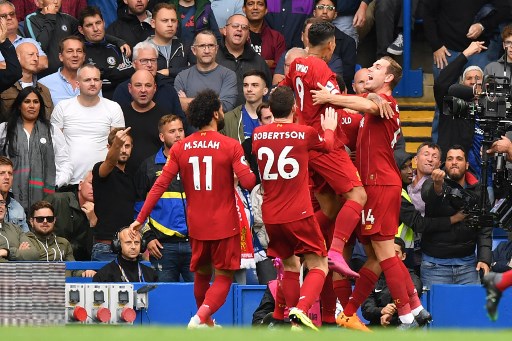 Liverpool players celebrate their first goal during the English Premier League football match between Chelsea and Liverpool at Stamford Bridge in London on September 22, 2019. (Photo by OLLY GREENWOOD / AFP)

Jurgen Klopp’s side extended their perfect start to the title race as they became the first club to win their opening six games in consecutive top-flight seasons.

Roberto Firmino increased Liverpool’s advantage before the interval and N’Golo Kante’s fine goal was not enough to give Chelsea tangible reward for a vibrant second half.

After Manchester City thrashed Watford 8-0 on Saturday, this was the ideal response from Liverpool as they bid to win the title for the first time since 1990.

Pipped to the trophy by City on the final day of last season, Liverpool are playing with a burning desire to end their rivals’ two-year reign as champions.

In contrast to the Champions League holders’ scrappy midweek defeat at Napoli, this disciplined display showed the Premier League is Liverpool’s top priority this term.

They are on a club-record run of 15 successive league wins and have lost just once in 45 top-flight matches, going unbeaten in the last 23.

Significantly for their title prospects, Liverpool’s success at the Bridge was just their second win in 13 away league games against the other established top-six teams.

Although they were hanging on by the end, if Liverpool take more points against the big guns, even City might struggle to keep them at bay.

Frank Lampard’s raw side, 10 points behind the leaders, competed gamely to offer hope of a bright future.

However, Chelsea are a work in progress — yet to keep a clean sheet in seven games and without a win in their opening four home games in all competitions.

A frenetic start could have brought a Chelsea opener when Tammy Abraham stretched in a vain attempt to turn in Mason Mount’s teasing low cross.

Those two Chelsea youngsters have caught the eye at the start of Lampard’s reign.

But it was Liverpool who took the lead in the 14th minute thanks their own gifted prodigy.

Fabinho’s pass broke to Sadio Mane and the Liverpool winger was bundled over on the edge of the penalty area by Andreas Christensen’s clumsy challenge.

Mohamed Salah back-heeled the free-kick into the path of Alexander-Arnold and the 20-year-old right-back smashed a sublime shot past Kepa Arrizabalaga into the top corner for his first goal since November 2018.

Abraham has already scored seven Premier League goals, but the striker fluffed his lines when he beat the Liverpool offside trap to meet Christensen’s long pass.

Clean through on goal, Abraham should have equalised but could only shoot straight at Liverpool keeper Adrian, who saved with his legs.

Chelsea thought they had equalised in the 27th minute when Cesar Azpilicueta prodded home from close range after Willian’s cross deflected to the defender off Fabinho.

But, in a huge momentum swing, the goal was disallowed after a VAR review showed Mount was offside in the build-up.

Lampard wore a rueful smile on the touchline and, moments later, the Chelsea manager’s expression was misery personified as Liverpool doubled their lead in the 30th minute.

Andrew Robertson curled over a free-kick from the left edge of the Chelsea area and Firmino, gifted far too much space by Christensen and Marcos Alonso, rose highest to head his third goal of the season.

Kepa made a good save to stop Firmino putting Liverpool further ahead from Alexander-Arnold’s cross early in the second half.

But Chelsea’s effort couldn’t be faulted and, having harried Liverpool onto the back foot, they reduced the deficit in the 71st minute.

Kante turned away from Fabinho with a graceful glide and, with Liverpool sitting deep, the France midfielder curled a superb strike into the top corner.

Michy Batshuayi was inches away from equalising in the final minutes, but Liverpool held on.