Danish rider Jonas Vingegaard was a surprising second in the general classification. 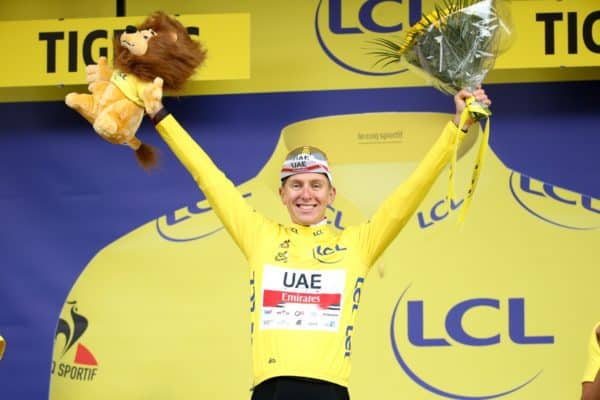 Pogacar stole in at the 11th hour to win the 2020 edition, but this year he stamped his authority in the first week and will pull on the yellow jersey beneath the Arc de Triomphe as the undisputed champion aged just 22.

“We did it,” he said with a huge smile that was absent after his exhausting time-trial on Saturday when he effectively sealed this victory.

“It’s never over until the last lap of the Champs-Elysees.”

Jumbo’s Belgian rider Van Aert stormed past Briton Mark Cavendish to take the 21st stage after also winning a time-trial at Saint-Emilion and a mountain stage at Mont Ventoux.

“It’s incredible to win again today, it hasn’t sunk in,” he said holding his baby on the podium.

“It’s a great send-off for Tokyo,” he said before flying off to the Olympic Games on Monday where he will lead the Belgian team.

Marking the end of the old era 36-year-old Cavendish narrowly missed out on a fifth win on this edition — and a record 35th ever on the Tour de France.

Jasper Philipsen was second on the day as Deceuninck rider Cavendish fell just short, punching his handlebars in frustration.

Cavendish did squeeze on to the roster in third. Four wins in the six stages that ended in a mass bunch sprint were enough for him to equal Eddy Merckx’s record of 34 stage wins on the Tour and secure him the green sprint points jersey.

Danish rider Jonas Vingegaard, also of Jumbo, was a surprising second in the general classification, while Ineos’ Richard Carapaz was third to follow his 2019 triumph on the Giro d’Italia.

The Bahrain Victorious outfit won the team award to end the Tour with a smile after a police swoop on their hotel and team bus earlier this week.

Pogacar “rode between the raindrops” after surviving a litany of crashes as the Tour embarked from the nation’s western tip at the Atlantic port of Brest.

The Slovenian then pulverised his rivals in the first time-trial as the race headed towards the Swiss and Italian border ski resorts where he also held his own.

The UAE Team Emirates leader then produced a pair of joyful mountain victories in the Pyrenees to rubber stamp his status as the best rider on the Tour this year.

Pogacar also won the awards for best rider under-25 and the king of the mountains polka-dot jersey, a triple he also achieved on his debut last year.