Pete sent Ye texts stating that he wanted no trouble with him, and would even like to meet his kids, but the rapper said no to his request. 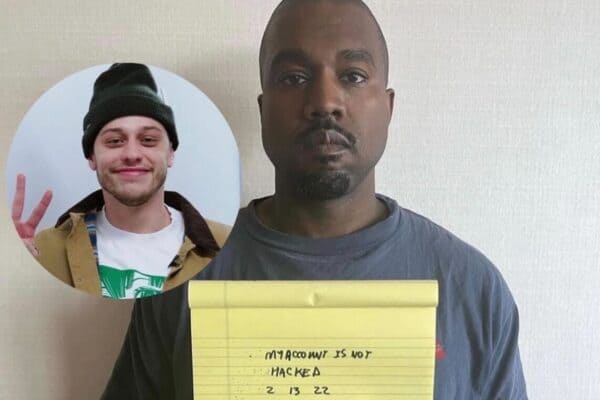 Kanye West seems to not be a fan of his ex wife Kim Kardashian’s new partner, comedian Pete Davidson, and has made it his mission to let the world know just how he feels.

Over the weekend the Can’t Tell Me Nothing rapper took to his personal Instagram account after taking a break from social media to post a series of photoshopped pictures of the comedian and his estranged wife, as well as screenshots from a conversation he had with Pete.

Ye started off his posting spree by claiming that Davidson was once in a relationship with Hillary Clinton, and even shared the tattoo that the comedian has of the politician with his fans and followers.

The rapper then went on to post an old gossip piece which alleged that Pete’s ex girlfriend and singer Ariana Grande called off their relationship because the television personality had sent intimate pictures of the singer to her late ex boyfriend, Mac Miller.

He also shared a conversation which he had with Pete, where the television personality had said that he wants no trouble with Kanye, and would even love to meet his children and spend some time with them.

In the caption of that post, Kanye said: “No you will never meet my children”.

What got Kanye’s fans concerned about his emotional and mental wellbeing was when he posted a photoshopped image of Marvel’s Civil War movie poster, which he edited by adding pictures of himself and some of his friends on the one side going head to head with Pete, Kim Kardashian, and other celebrities which the rapper has had a falling out with in the past.

Some of Ye’s fans and followers thought that the father-of-four’s Instagram page may have been hacked, and that he was not responsible for all the posts which were shared on his page over the weekend, but the rapper then shared a picture of himself holding up a piece of paper which said that he had not been hacked.

All the posts that Kanye shared over the weekend about Davidson have since been removed from his page.

Hours after the posts were deleted, the 44-year-old producer announced that he partnered up with McDonald’s for a Super Bowl commercial.

In the caption of the post, Ye also shared that he fought for his family over the weekend, hosted yet another Sunday Service, trended on Twitter above the Super Bowl, and received a pair of gloves from Odell for himself and his children.

“Odell gave me and my kids his gloves. Dre performed. Rams won. And I did a Super Bowl commercial with McDonald’s. God has a plan. Love over fear. Today was awesome,” said Ye in the caption of his post.