Kommetdieding brings it home for the small guys

Kommetdieding was drawn in the No 18 stall – the widest – but was brilliantly piloted through the early melee by Lerena to gain a good travelling position in midfield. 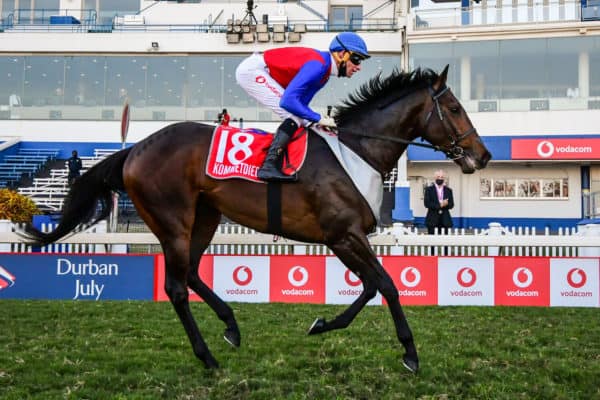 Kommetdieding, with Gavin Lerena in the saddle, wins the Durban July at Greyville Racecourse on Saturday. Picture: Darren Stewart/Gallo Images

Kommetdieding won the 2021 Vodacom Durban July at Greyville – a result with several fairytale, feelgood threads that will give an ailing racing industry a massive boost.

The three-year-old colt cost just R55,000 as a yearling – a pittance in thoroughbred terms – and is trained by the small Cape Town stable of veteran Harold Crawford and his daughter Michelle Rix. Rix was her father’s assistant for several years until taking out her own licence.

Ashwin Reynolds is the first owner of colour to win Africa’s greatest race. Reynolds was not permitted onto the Greyville premises to lead in his winner due to the Covid Level 4 restrictions.

The horse by Elusive Fort and bred by the posh Klawervlei stud might not have grabbed attention as a youngster, but he was given a brilliant name by his new owner and started winning races.

Kommetdieding, a cheeky use of Cape Flats patois, made the horse the most popular horse in the Western Cape – by far. Cape bookmakers are said to have taken a major beating from the July.

It was the first Durban July win for the well-travelled former champion jockey Gavin Lerena, who had to lose about 4kg in two weeks to make the 53kg allotted to Kommetdieding.

Loyal Crawford-Rix groom Luvo Dinglawayo, the colt’s closest companion day-to-day, was among the celebratory gathering on the podium.

Kommetdieding was drawn in the No 18 stall – the widest – but was brilliantly piloted through the early melee by Lerena to gain a good travelling position in midfield. In the straight, Lerena pulled wide and went after pacemaker Crown Towers, snatching the lead with 150m to go and holding off challenges from 3-1 co-favourites Linebacker and Got The Greenlight on either side of him.

The one sad note was Kommetdieding’s regular jockey for his six runs to date, Sihle Cele, gave up the ride to a more experienced rider in order to give the horse his best chance on the day.

Top trainer Mike de Kock said afterwards: “This is what movies are made of.”

South Africa – not just the Cape Flats – has fallen in love with a horse with an unassuming background and a comical name. Kommetdieding is our latest hero.