Stormtrak replaces the Thunder as the likely final special edition version of the current T6 Ranger. 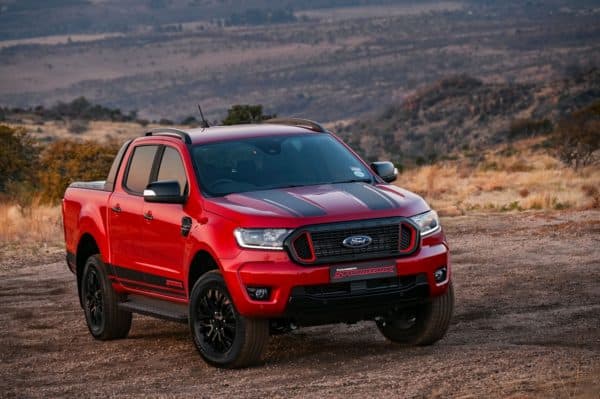 Cosmetic changes to the Stormtrak are evident.

Having confirmed availability of the Ranger Stormtrak two months ago, Ford Motor Company South Africa has now announced pricing details of the latest special edition Ranger that replaces the Thunder as model filler between the Wildtrak and Raptor.

Unveiled in Europe earlier this year with the Blue Oval, at the time, branding it as a market specific model, an approach also taken with the Thunder, the Stormtrak, like its predecessor, it based on the Wildtrak and mainly receives a number of model bespoke fittings inside and out with no changes underneath the bonnet or on the specification sheet.

Likely to be the final special edition version of the current T6 Ranger following the teasing last week of the all-new T6.2, the Stormtrak’s exterior revisions comprise black 18-inch alloy wheels, the grille from the Thunder, gloss black finishes at the base of the doors and front bumper, twin black racing stripes on the bonnet and black roof rails.

Along with black mirror caps, red 3D Stormtrak badging on the tailgate and at the base of the front doors, Ford has replaced the manual opening roller shutter that featured on the Thunder with a powered cover that can be opened and closed using the key fob, buttons inside the binliner and switches on the instrument panel inside.

Carried over though is the manually sliding bedliner divider and rubberised loadbin. Rounding the exterior off is a choice of four colours; Frozen White, Blue Lightning, the Sea Grey hue taken from the Thunder and the new Lucid Red.

Less dramatic are the changes inside where red stitching adorns the leather seats, steering wheel, dashboard and gear lever, while the chairs themselves gain embroidered Stormtrak backrests. The cabin is capped off by the inclusion of illuminated doors sills.

As mentioned, specification carries over from the Wildtrak with the same applying to the 157kW/500Nm 2.0-litre bi-turbo Panther turbodiesel engine and General Motors co-developed ten-speed automatic gearbox. Buyers do however have a choice of two-wheel-drive or four-wheel-drive.

Like the rest of the Ranger range, the Stormtrak is covered by a four year/120 000 km warranty as well as a six year/90 000 km service plan with the two-wheel-drive carrying a price a tag of R790 300 and the four-wheel-drive a sticker of R846 500. For more information, click here. 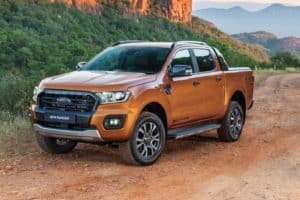 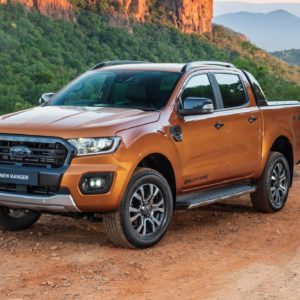