Scolari has kind words for Bafana

Perhaps Felipe Scolari was revealing his modest side on Wednesday night. The Brazilian national team coach said the 5-0 drubbing his Selecao inflicted on Bafana Bafana did not suggest Bafana were a bad side. 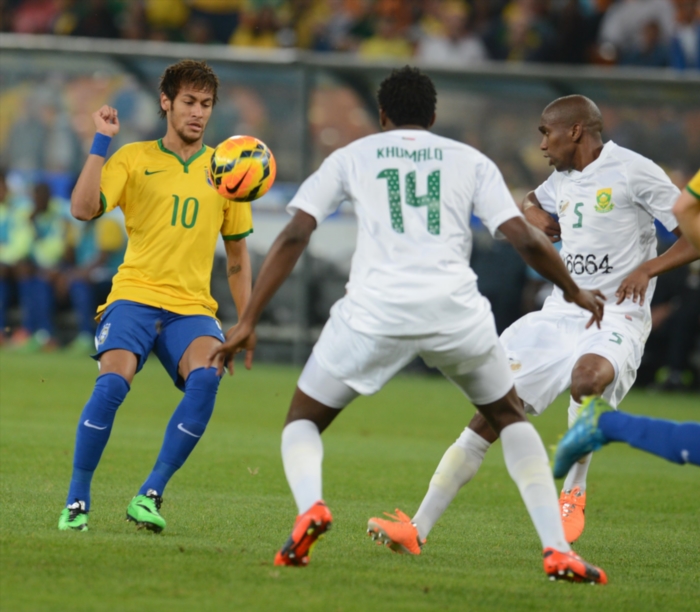 Neymar of Brazil and Bongani Khumalo of South Africa during the International Friendly match between South Africa and Brazil at FNB Stadium on March 05, 2014 in Johannesburg, South Africa. Picture: Lefty Shivambu/Gallo Images.

“It’s a surprise they are not at the World Cup looking at the way they played,” he said after the game.

You would maybe think Scolari was watching a different game.

“The scoreline doesn’t tell the whole story of the game,” he said.

“They moved the ball well and played very well. The difference between the two teams is that we have some very special players who can win games.”

What Scolari did not say though was that his side outclassed Bafana on a balmy evening at the FNB Stadium.

Neymar scored a hat-trick, with Oscar and Fernandinho netting the other two.

Barcelona’s Neymar gave Bafana a torrid time whenever he had the ball and created chances for his side.

Meanwhile, Scolari’s counterpart Gordon Igesund said his team were just beaten by a good side.

“It was not a bad performance, but they were just so much better than us,” Igesund said.

“Their decision-making in the last third was much better than ours. They were very clinical, especially Neymar. He was outstanding.”

Igesund’s contract ends in June and this record defeat for Bafana may increase pressure on him to vacate the position.

“We played against a very, very good team,” Igesund said.

The only thing which pleased Igesund about his team was the display of midfielder Thulani Serero.

Serero was playing his first game for Bafana since last September when he had a fallout with Igesund, who accused him of faking an injury.

“I thought he was very good tonight and you could see that he is back and playing at a higher level,” he said of the Ajax Amsterdam player.

“I was very happy with his movement.

“He was trying to make things happen for us, but we fell short in certain areas and it surely showed that we are not at the level that Brazil are.

“Serero showed his class and he was by far our best player today.”

GFA call Safa's protest 'a hoax' and call for heavy Fifa fine.
7 days ago
7 days ago

GFA call Safa's protest 'a hoax' and call for heavy Fifa fine.
7 days ago
7 days ago