#TBT WATCH: Malema reminds Mbete how Zuma ‘used’ her and how a cow was slaughtered prematurely

Malema told Mbete the 'poor cow' she slaughtered had died for no reason as both Zuma and the ANC Women's League had ditched her to back Nkosazana Dlamini-Zuma. 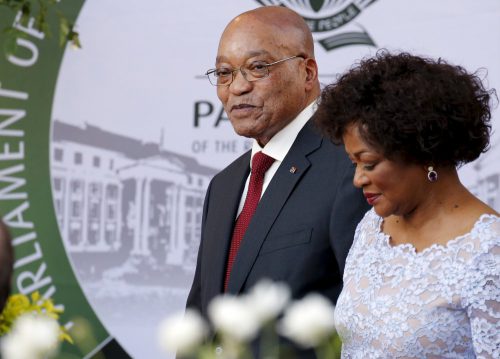 A few hours before 4 000 plus vetted delegates to the ANC national conference could vote, Parliament speaker and ANC chairperson Baleka Mbete announced she had abandoned her bid to become the party’s president to the media.

The strong media crew covering the event had earlier held impromptu debates about one topic – which branch had exactly nominated Mbete and and exactly who did she intend bringing aboard if she ascended to the highest post.

In the last throwback Thursday of undoubtedly a year in which EFF’s antics in Parliament continued to leave Mbete cold, we revisit an epic duel between the BFFs during state of the nation session President Zuma was to address.

As expected EFF had rose to object to Zuma ‘the criminal’ adressing Parliament. Mbete had evidently decided to put a stop to the stand-off which almost collapsed the sitting the previous year by asking Malema to immediately leave.

“You are so prepared to keep a man who violated the rules, the constitution, you are prepared to chase out people who are protecting the constitution in the name of the rules. If there is anyone who must leave, it is this one (Zuma). I am not going anywhere! I am elected here!,” Malema went on the offensive.

Just when it seemed he will heed Baleka’s decision by rather rallying his red beret troops to vacate the house, he wasn’t done.

“This is what has made you not to be a candidate of the woman’s league! Exactly that! Your conduct has failed you to be a candidate for president because you are irrational, impatient and partisan! Even your own people have dumped you!

“After they told you, you are their candidate. You went home to do umgcimbi (ancestral ceremony) and appeased the ancestors, thinking you were going to be a president! After that they dumped you, because of this conduct!

“How do you chase us for breaking the rules, and you are not chasing a man who has broken his oath of office,” Malema added referring to Zuma.

When Mbete interjected that Malema’s rant was abusive towards the house he fought back – “We are not going to allow you to abuse us the whole night. You are scared of Zuma. He used you, he dumped you! He promised you that you were going to be president, and you went home and slaughtered a cow. We are abused by Zuma here!”