Dr Ken Resnick of Smart Choice Parenting was responding to a video that surfaced yesterday showing two teenage pupils having a fist fight. 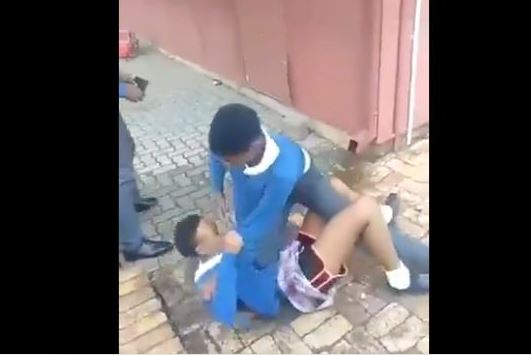 South Africa’s parents have produced a generation of angry children lacking self-confidence and discipline, leading to aggression and fights at school, an educational psychologist says.

In the video, which evoked outrage on social media, a boy and girl are seen grabbing each other. The boy punches the girl while she holds onto his shirt. The two fall to the ground. The girl tries to defend herself, but the boy pins her to the floor with his knee on her chest while other pupils try to pull him off of her.

The two get on their feet again and the boy grabs the girl and slams her on the floor. He gets on top of her and punches her in the stomach while another pupil yells “don’t hurt her!”. The pair are then separated.

While social media users were shocked by the level of violence, apparently the girl instigated the fight by attacking the boy. It happened on Friday and the two have since been suspended, Gauteng education department spokesperson Steve Mabona said.

The parents of both pupils were called to the school to discuss the disciplinary processes. The disciplinary hearing will be held on February 24, Mabona said.

“Our psychosocial team was dispatched to the school to give support to all affected by the incident.”

Watch: a male learner beats and throws a female learner to the ground pic.twitter.com/IXNLldKu3X

But according to Resnick, incidents like these happened because parents did not teach children appropriate behaviours, producing a generation that was lacking in grit, determination, morals and values.

“People often forget that such behaviour begins at home,” Resnick said. “It is a major problem – the attitude and aggression these children have. They don’t feel good about themselves and are influenced by the peers.

“By the time they are teenagers, it’s too late. For a girl to have so much aggression is scary and, unfortunately, this is becoming common.

“Early childhood learning has to start at home and cannot be up to the school.

“The parents’ role is to ensure their children become independent, positive people.

“But beneath the surface, there is a generation of very angry kids.”