Kenneth Blaine, who is 80-years-old and has lived in the council-owned house for 43 years since he moved in with his father – who worked for the council – and mother in 1976, is now being evicted by the City who wish to auction the property. It is clear the house has not been maintained by the City for decades, with Blaine saying the last time the City did anything with their asset was paint it 20 years ago. Reclaim The City, who is supporting Blaine in resisting his eviction, has been told by City lawyers to desist or the City will seek “relief” from the High Court. Photo: Steve Kretzmann

Lawyers representing the City of Cape Town have threatened legal action against activist organisation Reclaim The City unless it agrees, in writing, to not impede the City’s attempts to evict 80-year-old Kenneth Blaine from the council-owned house in Woodstock he has been living in for 43 years.

Blaine and his family were evicted on 16 September following an order by the Cape Town Magistrates Court, and spent the night on the street before intervention by Reclaim The City saw them moving back into the house, although their tenancy remains insecure.

The next day, 17 September, the City put the house Blaine and his family were living in on auction, along with 26 other city-owned properties and parcels of land, but the auction was put on hold after it was disrupted by Reclaim The City protestors.

The City’s request to Reclaim the City to undertake not to help Blaine stay in the house, was sent on 26 September.

The lawyers from QJ Williams and Associates, acting on behalf of the City, wrote that all legal processes were followed in obtaining the eviction order against Kenneth Blaine and family granted by the court on 29 May, which stated the Blaine family had until 31 August to vacate the property.

The lawyers’ letter said that the eviction was deferred for two weeks after an “indulgence” was requested by legal practitioner Rene Carstens from Cape Town Justice Centre. The request for a two-week delay was to allow the Blaines to “secure alternative accommodation”.

The eviction was executed after “City officials attended the property on 13 September and recorded that the Respondents had no intention of vacating the premises”.

On 16 September the City took occupation, changed the locks, barricaded the property, and posted security guards, leaving the Blaines, supported by members of Reclaim the City, to spend the night on the pavement.

The City’s lawyers said the security guards were threatened and intimidated and forced to leave the property, whereafter the Blaine family “unlawfully and forcefully gained entry into the property with the assistance of members of the community”.

They said that the City has since 2014 been informing the Blaine family they want them out the house, and met with them in November 2016 and June 2017 to explain the City’s available housing opportunities. 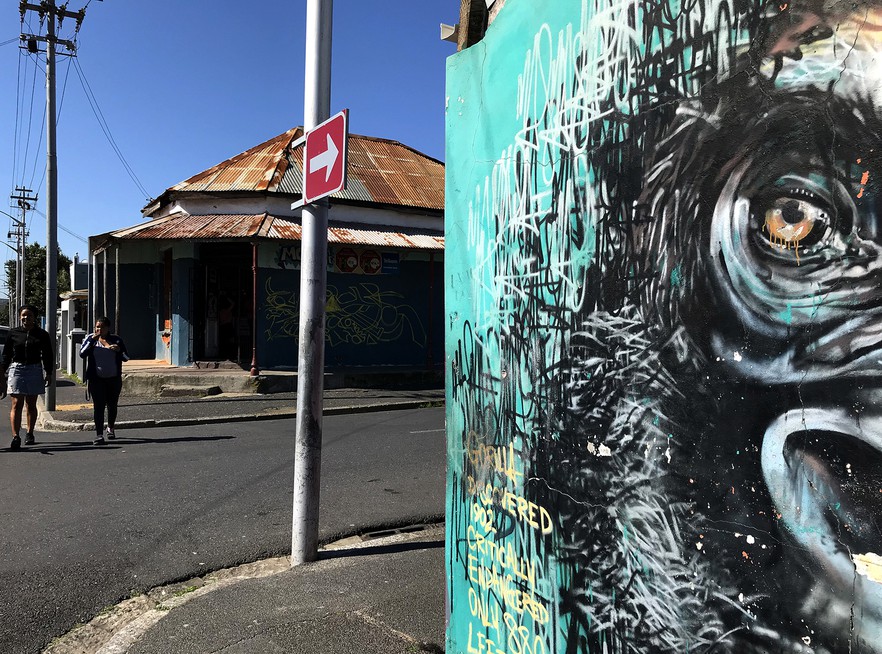 Guided tours to view the graffiti in Woodstock are offered to tourists while working class families who have lived in the suburb for decades are being evicted or forced out by high rentals in the area, which remained mixed under apartheid despite the Group Areas Act. Photo: Steve Kretzmann

Again on 18 October, the Blaines were told they were “required to advise the City” should “an eviction order render them homeless” and they were given a list of three social housing providers to contact.

“The City has followed a lengthy and legally sound process to secure vacant occupation of the property, which process included meaningful engagement with the respondents and an offer of emergency accommodation in that eviction would render the Respondents homeless,” stated the City lawyers.

Should Reclaim the City not provide a written undertaking to not impede the City’s “lawful process” of securing and retaining vacancy of the property, “appropriate relief” would be sought from the High Court.

This demand has been rejected by Reclaim the City.

Responding on behalf of Reclaim the City on 2 October, the constitutional rights and social justice organisation Ndifuna Ukwazi, stated there was a moral compulsion to support Blaine and his family as it was clear they would become homeless once evicted.

“Reclaim the City was particularly concerned about Mr Blaine who is particularly vulnerable as an 80-year-old pensioner with health issues,” stated Ndifuna Ukwazi’s letter.

The response said that Blaine and his family remain at risk of being made homeless if evicted, and Blaine “advised Reclaim the City that he would like the City to provide him and his family with alternative accommodation in the area”.

Former Ndifuna Ukwazi co-director Jared Rossouw said the City had an obligation to ensure nobody is made homeless by an eviction, “so you see that through until the obligation is discharged”.

‘In this instance the legal procedures just serve as a box ticking exercise. At the heart of it they put an old man on the street and want to do it again,” said Rossouw. “They simply have no solution for people like uncle Kenny (Blaine).”

The response to the City also states that Reclaim the City is opposed to the sale of public land, as this should be used for affordable housing.

With the average household income (taken as the middle of the median range) in Cape Town at R4,775 according to the last census of 2011, and a single room in Woodstock being rented at R5,000 per month and the lowest priced two-bedroom apartment for rent in Woodstock that we could find on Property24 was offered at R7,400 per month, the majority of Capetonians cannot afford to live near the city centre. Prices for suburbs such as Mowbray or Observatory are similar, if not more expensive because of the demand for student accommodation.

Because of the lack of affordable housing, particularly in areas in which working class families lived for generations — such as Woodstock and Salt River — people are being evicted daily.

But this average of 1.8 eviction hearings per day is just the tip of the iceberg said Rossouw, as there are 12 other magistrates’ courts in the city plus the High Court before which eviction cases are heard.

Also, many evictions don’t even get to court, said Rossouw, as many people are living with month-to month leases and no security of tenure.

He said Ndifuna Ukwazi struggles to obtain city-wide statistics on evictions as no state agencies seem to keep them or make them available. This is why the organisation has asked volunteers to monitor the courts as often as possible.

Bosch said instead of selling off public land, the City should be using it to facilitate affordable housing in well-located areas.

The City’s Open Data Portal shows that it has sold 25 residential properties since January 2018, eight of them to businesses. This includes property in well-located areas such as Clifton (sold for R23m), Camps Bay (sold to business for R7.1m), Tamboerskloof, Fish Hoek, Somerset West, and Goodwood.

City of Cape Town spokesperson Luthando Tyhalibongo said the City could not comment on what relief would be sought against Reclaim the City as it was still considering its options while engaging with the organisation. It did not want to “compromise the outcome and preliminary discussions”.

The question as to when the City last undertook any maintenance of its property at 29 Plein Street, Woodstock, where Blaine lives, was not answered.

As to whether a social worker ever visited the Blaine family to assess their situation, Tyhalibongo stated: “The City has been in discussion with Mr Blaine since 2014. The City has followed a lengthy and sound legal process to secure the vacant occupation of the property, which process included an offer of emergency accommodation should the process render them homeless. Such offer was regretfully declined.”

He stated the sale of City-owned properties provided “real opportunities to the residents of our City to invest in their own property, or business venture”.

However, the average sale or auction price for the 25 residential properties sold over the period was R2.1 million, with a third of them to businesses.

He stated the land identified for auction or tender was “considered surplus to the requirements of the City’s municipal service provision”.

“The underutilised properties confer no social or economic benefit should it remain undeveloped and all sectors of society should be able to access public land via a transparent disposal mechanism to give ordinary citizens and public benefit organisations the right to own property.”