Dr Sylvester Hlati collaborated with the park after noticing that poachers were often found in possession of muti. 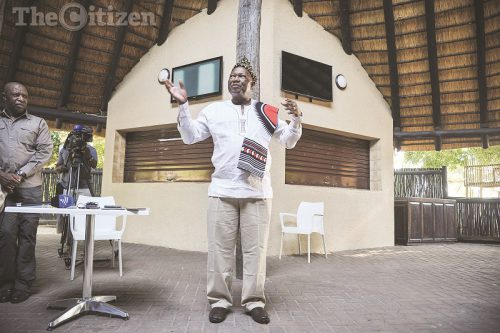 Silvester Hlati a traditional healer speaks to media at the Kruger National Park about the benefits of government funding and aid for traditional healers and how that can help curb rhino poaching, 24 March 2017. Picture: Jacques Nelles

Traditional healers had to sometimes live in hiding for fear of angry rhino poachers, who threatened their lives after a failed poaching mission.

Speaking at the Kruger National Park on Friday, Dr Sylvester Hlati, president of the SADC Unified Ancestors Traditional Healers and Practitioners of South Africa, said traditional healers often provided this service to poachers as a way of making money.

But after initiating a campaign with the park to raise awareness about the negative role traditional healers played in the rhino crisis, Hlati said seven poachers had been arrested.

He said the programme, which was launched in 2012, was a collaboration between himself and the Kruger National Park to educate traditional healers in Mpumalanga, Limpopo and Mozambique.

He approached the park when he noticed that poachers were often found in possession of muti.

“Traditional healers have muti to stop a lion from biting or, if a poacher is arrested, to delay prosecution by making sure the magistrate gets sick. As a leader, I had to intervene. We, as traditional healers, are not prepared to work with criminals,” he said.

His plea, however, was not well received by all traditional healers, many of whom failed to understand the impact of their services.

Hlati said healers rejected the campaign as they needed the money from poachers.

“But they realised that it was wrong. What started to happen was, once a poacher got muti and their accomplices were killed or arrested, the poachers would threaten to harm the healer for giving them muti that didn’t work. Healers would often run away from home out of fear of being killed.

“We can protect this park by using these powerful muti to protect the animals instead of poachers,” he said.

South African National Parks spokesperson Ike Phaahla welcomed the initiative as a starting point for addressing poaching from within the community.

“It is a good initiative in the sense that a lot of problems within the park should be solved from outside.

“If healers can stop making people believe they are invincible and can succeed when getting in the park, the less poachers we will see.”

Despite efforts to combat the killing of rhino, the carcass of a white rhino with no horn was discovered this week.

Rangers and police were at the scene on Friday, where scores of vultures were seen circling above the carcass.