Ramaphosa defends Zuma’s right to set up inquiry into himself

The presidential hopeful did not show support for Thuli Madonsela's recommendation that the chief justice should appoint the inquiry's head. 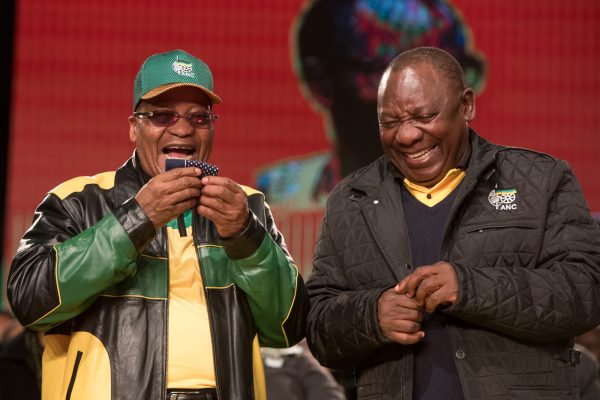 Deputy President Cyril Ramaphosa this afternoon refused to be drawn on whether it is ethically and morally acceptable for President Jacob Zuma – who has been implicated in state capture allegations in the public protector’s report on the matter – to appoint the judicial commission of inquiry into the debacle.

Ramaphosa also told MPs in parliament that the information he had on various allegations involving the controversial Gupta family and the head of state was the same information from the State of Capture report and the leaked Gupta emails.

“This has formed the basis of the information that myself and others have been exposed to. It is critical that a judicial commission of inquiry must be established as a matter of urgency.

“Law enforcement agencies need to give these allegations their full attention; those implicated must be prosecuted. Parliament must be applauded for initiating its own inquiry. These allegations are serious and are of great concern, they should be investigated without any fear or favour,” said Ramaphosa.

Challenged by Agang MP, Andries Tlouamma, on why he had failed to condemn the president over the state capture allegations, and for being a “modern-day [Pontius] Pilate”, Ramaphosa said he was not in parliament to win a popularity contest.

“On matters that affect the republic and the interest of our people you will find that many who are on this side have been able to speak out. I have spoken out and suggested a judicial commission of inquiry. It has been canvassed with Zuma and he is on record as saying he is applying his mind,” he told the opposition benches.

Opposition MPs proceeded to press Ramaphosa on when exactly the commission would be appointed, and he refused to budge.

“The commission will be set up when the president sets up the commission. We need to give the president the time and space to set up this commission. It will have the power, the ability and the authority to investigate everything. Date and time will be determined by the president himself,” he reiterated to haggling from opposition benches.

EFF deputy president Floyd Shivambu twice took Ramaphosa to task on whether it was morally acceptable for President Zuma to appoint the commission, with the deputy president replying that this was what was prescribed by the constitution.

“You could argue he [Zuma] is conflicted because the public protector’s report involves him; now what do you do. The constitution says he has to appoint any commission of inquiry. At the same time, the court said the constitutional provision stands.

“I take comfort in that the president said he will appoint a commission. We all have to rely on a person who is a judge who will be guided by their own independence and legal knowledge. We should have confidence in the efficacy of that process,” he told Shivambu.

When asked whether the portfolio committee probing state capture allegations was adequately resourced, Ramaphosa reminded MPs that his role as leader of government business did not give him authority to intervene.

“The issues of resourcing portfolio committees is for parliament to determine and decide on. The leader of government should not and will not interfere. That one should be left to parliament,” he said.