Pundits say the deputy president should have at least attempted to reach out to Mkhize or Sisulu as they were already ‘doing a good job campaigning on the ground’.

ANC deputy president Cyril Ramaphosa could have made a fatal mistake by announcing his “winning team”, because this could trigger a backlash against him at the upcoming ANC national conference, say political analysts.

“The move does seem to be a strategic mistake because it lays Ramaphosa open to accusations that he is engaging in slate politics,” said Steven Friedman from the University of Johannesburg.

This after the former trade unionist announced his top six leadership list at the weekend – what he dubbed the “winning team”. 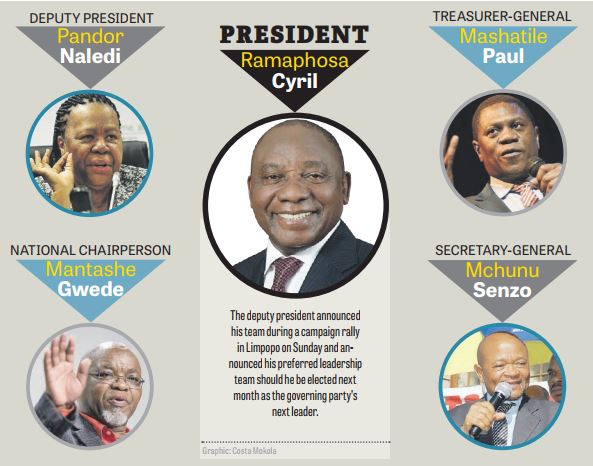 He surprised many when he announced Naledi Pandor as his running mate with outgoing ANC secretary-general Gwede Mantashe as national chairperson. The crucial position of secretary-general will go to former KwaZulu-Natal premier and ex-ANC provincial chairperson Senzo Mchunu. Gauteng ANC leader Paul Mashatile has been earmarked for treasurer-general.

According to an insider, the CR17, as the Ramaphosa campaign team is known, deliberately left the deputy secretary-general post empty to reserve it for a member from either the Nkosazana Dlamini-Zuma camp or one of the presidential candidates.

This after Sisulu was involved in a spat with Mantashe, whom she severely criticised to the extent of questioning his struggle credentials after Mantashe suggested that Ramaphosa, as current deputy, should automatically become the next ANC president as per the party’s 60-year-old tradition.

Sisulu also annoyed some when she said she believed that Fezekile Ntsukela Kuzwayo, the victim of alleged rape by President Zuma, believed that she was raped by the president. This was seen as a reckless statement within the CR17 camp, who want field candidates with an unblemished image.

Besides, Sisulu herself was dilly-dallying about her commitment to become Ramaphosa’s deputy, instead saying that he should be her deputy. This was despite the fact that she had little chance of winning the presidential race on her own.

Ramaphosa’s support has begun to solidify countrywide with a huge showing in Limpopo, where he is way ahead of Dlamini-Zuma in branch nominations. The latest figures show that the former African Union chairperson was behind even in the Mopani region, despite that being the area her supporters supposedly secured in recent party regional elections.

Ralph Mathekga, another analyst, said Ramaphosa at least should have attempted to reach out to Zweli Mkhize or Sisulu because the two were already “doing a good job campaigning on the ground”.

An independent observer separately questioned Pandor’s constituency and her lack of a grassroots base. But another observer defended Pandor, saying her education was needed now more than ever in both the ANC and in the country.

“We have been put in this mess by an illiterate president, Jacob Zuma, therefore we must try an intellectual like Naledi,” he said.

A source within the CR17 camp said while Ramaphosa could have chosen any one of the present candidates as his deputy, he wanted people who would add value to the party.

Friedman said Ramaphosa’s move could trigger a backlash from the party branches at the conference.

Friedman said that, although the reasons were unclear, Sisulu’s exclusion could be due to a fallout between her and Ramaphosa.

“It could be that she rejects being nominated as deputy president while she is a presidential candidate,” he said.

The analyst’s view is in line with what Sisulu told The Citizen in a recent interview. She said she was sick and tired of seeing women playing second fiddle to men in the ANC since its founding in 1912.