The Zuma years – a tainted legacy

Throughout his tenure, Zuma dodged corruption charges by keeping a tight grip on the NPA. 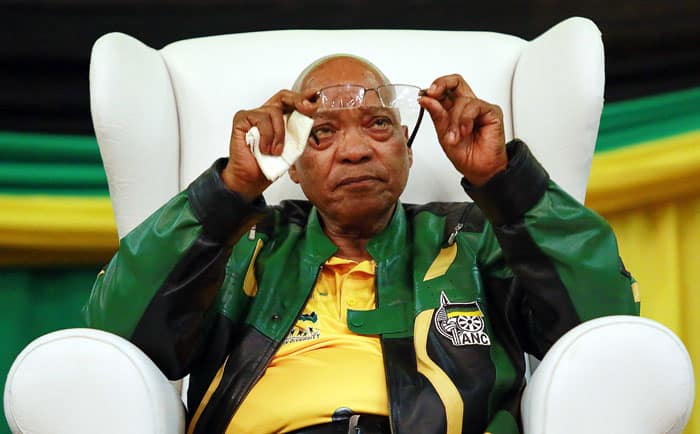 After almost nine years of successive corruption scandals and a steady erosion of the economy, Jacob Zuma on Wednesday night resigned as president in the same manner his predecessor Thabo Mbeki departed public office.

Zuma was recalled by the African National Congress (ANC) weeks after he ceded the leadership of the party to Cyril Ramaphosa. But unlike Mbeki who resigned in a statesman-like address on national television in September 2008, Zuma refused to go quietly, initially telling the ruling ANC’s top leadership that it would lose national elections in 2019 without him at the helm.

The dominant faction in the party had made a different calculation and refused to squander further support, or the vote of confidence the markets showed Ramaphosa with the rand strengthening some 18 percent to the US dollar since he took control of the ANC in December. With a review of the country’s credit rating by Moody’s due in March, the risk of allowing a desperate Zuma to deliver a populist state-of-the-nation address that would dent investor confidence was too great.

Hence the ANC finally moved to “self correct”, the term it had employed in the ten months since Zuma fired Pravin Gordhan as finance minister and senior figures in the party publicly turned against him.

The ANC national executive committee (NEC) on Monday night made a decision to recall Zuma from office and this was reinforced on Wednesday when the party’s parliamentary caucus agreed to support an amended motion of no confidence – initially brought by one of the main opposition parties – should Zuma still refuse to step down voluntarily.

In the end, Zuma formally announced his resignation at around 11pm during a live television broadcast, with the words: “I have therefore come to the decision to resign as President of the Republic with immediate effect. Even though I disagree with the decision of the leadership of my organisation, I have always been a disciplined member of the ANC.”

On August 8 last year, Zuma narrowly survived a vote of no confidence after a number of ANC MPs defied a three-line whip and voted with the opposition. But six months later, his bid to impose his preferred candidate at the head of the fractured party had failed and Ramaphosa had the upper hand.

His exit was as messy as Mbeki’s was orderly, in line with their political legacies.

The one was a pan-Africanist intellectual never accused of personally enriching himself though his administration was tainted by corruption scandals, the other an unschooled political prisoner, nationalist and polygamist with a weakness for money.

Zuma was elected in April 2009, shortly after the National Prosecuting Authority (NPA) opted not to pursue 783 graft charges against him stemming from a multi-billion rand arms deal Mbeki inked a decade earlier. The cited reason was that the Mbeki administration appeared, according to intelligence service tape recordings of telephone conversations obtained by Zuma, to have tried to manipulate the timing of the indictment to his political advantage.

The opposition Democratic Alliance secured the release of the recordings in a legal battle that spanned Zuma’s entire period in office. Late last year the North Gauteng High Court set aside the decision to drop the charges, and last week Zuma had his final stab at making representations as to why he should not be indicted.

Throughout his tenure, he had dodged the charges by keeping a tight grip on the prosecutions office, but it was prised open by another high court judgment on December 8. Judge Dunstan Mlambo ruled that Zuma was too compromised to name a replacement for National Director of Public Prosecutions Shaun Abrahams and therefore Ramaphosa should do the appointment.

Only a week later, the Supreme Court of Appeal upheld another high court ruling that had found Zuma incapable of performing his presidential functions, in this case appointing a judge to head a commission of inquiry into state capture — the byword for the corruption of the country’s biggest state-owned companies by the controversial Gupta family.

State capture saw the family influence Zuma’s Cabinet appointments, and eclipsed the Nkandla scandal in which Zuma was forced to repay R7.8 million in taxpayer’s money spent on improvements to his private rural home.

Two respected finance ministers were fired as the battle for control of public spending between National Treasury and the president escalated. When Zuma fired Gordhan, after trying to bring trumped up corruption charges against him, S&P Global downgraded South Africa’s credit rating to junk status.

But the full cost to the country emerged recently as Parliament began an inquiry into graft at Eskom. Executives detailed undue influence and illicit deals that funneled billions of rands to companies owned by the Gupta brothers. In the case of Tegeta, in which Zuma’s son Duduzane holds a stake, Eskom secured a bank guarantee to help it buy a coal mine that now holds a lucrative supply contract with the utility.

Zuma responded to the pressure that came with the revelations as he always has, by claiming he had done nothing wrong and was unfairly tarnished.

It was what he told the court when he faced rape charges before he was elected, public rallies when he sought re-election in the wake of the Nkandla scandal and his own party when it bled support in local government elections.

The strategy worked for as long as he had the power to hand out top posts and authorise spending. It failed when the power shifted, and his network of patronage could not protect him any longer.