Martha Nukeria’s warm embrace changed the life of Connie van Staden when she became his 'Mommy'. 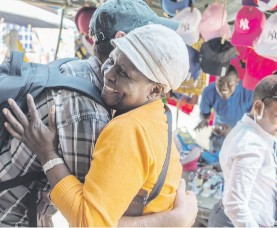 For a black woman to take “a white, stinking drug user bum from the streets and show him motherly love” is ultimately one of the biggest reasons why Connie van Staden, 42, finally changed his life for the better and turned away from heroin after almost nine years of addiction.

He says most people treat homeless drug addicts like “garbage” and not like human beings – but not Martha Nukeria, a street jewellery vendor who took Van Staden as her son from the day she met him, at a time when he roamed the streets.

And it was her warm embrace that would one day change his life for the better, away from the drug lines and needles.

Nukeria would even take his dirty clothes and blankets to her Soshanguve home, wash them and bring them back.

“Mommy fed me and she treated me like her own son. She hugged me and loved me. I needed that motherly love and I think every drug user on the streets needs it too,” Van Staden tells The Citizen.

He says he supported his drug habit by begging, stealing, working, shoplifting and opportunistic sex.

“I did it all for drugs. We would sit in one long line, with only one or two needles, not thinking about the diseases or consequences. And many times ‘Mommy Martha’ would cry openly saying: ‘Don’t worry, one day things will change my son. You will be a new man.’

“Mommy is a very religious woman and she knew the challenges I was facing because we would talk. I told her that I could not do this any more.”

Recalling those days, Van Staden remembers that when the sun sets over Tshwane, “the streets become a jungle”, with homeless people and drug users fighting over small portions of food, blankets and spots to sleep in.

“Your life is literally in danger,” Van Staden says.

By contrast, he once lived in a warm, safe home, with his wife and son.

However, because of his drug habit, he is now out of touch with his family after his wife remarried.

Drawing attention to his upbringing, he adds: “I grew up in a loving and happy home, but there was a lot of alcohol involved. Both my parents drank themselves to death, as they were alcoholics.”

Van Staden began drinking at the age of nine. By age 15 he started using drugs “in the club scene” and referred to himself as a “responsible drug user” at the time.

But the drugs eventually overtook his life, leading to years on the streets. He lost everything, including his profession as a wedding ring designer.

He ran away from home because “I was tired to see the disappointment and hurt in my family’s eyes”.

Nukeria’s stall would nevertheless become his home during the day when she became his “mommy”.

“She would keep my backpack for me with my blankets and clothes and all my worldly possessions while I would go out and find money and smoke drugs.”

Today Van Staden has been clean for more than three years and he is the regional human rights and advocacy officer at StepUp Project.

“We work in the city with drug users and, because many of us are former drug users, these guys relate to us and one by one we help them on the right path, just like StepUp did for me,” he says.

Van Staden and another friend later helped Nukeria to put her son David, 28, in a rehabilitation programme. Today he is also clean and working for Tshwane’s Hopeline.

“The real hero is Mommy Martha as she was the only one who stood by [us] and her unconditional love saved us all,” Van Staden adds.

And as Mommy Martha kisses and hugs her sons, she says: “I am a very lucky woman. I am so proud of my sons.” 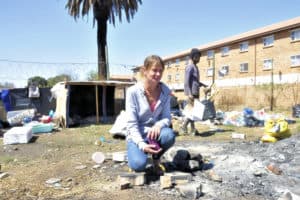 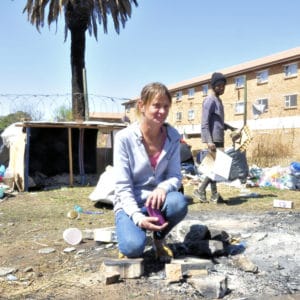