Zuma is trying to ‘rape justice’, amid yet more delays, says opposition

Justice delayed appears to be exactly what the former president is trying to do, according to his critics. 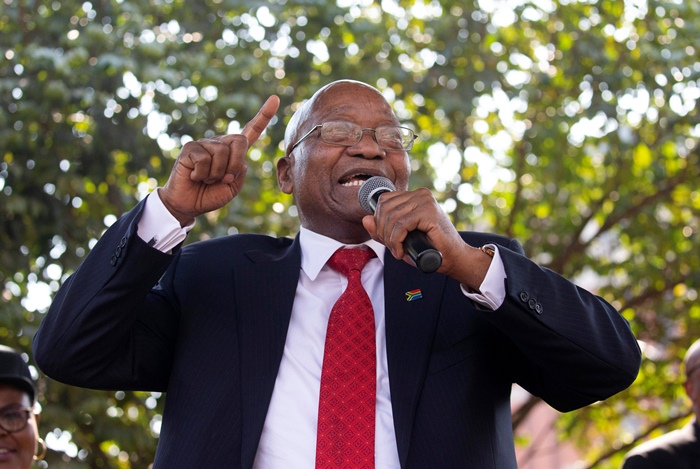 Yet another postponement in the corruption case against Jacob Zuma saw the former president lament the slow pace at which the 13-year-old matter is progressing while addressing crowds gathered outside the KwaZulu-Natal High Court in Pietermaritzburg.

Zuma told his supporters that “justice delayed is justice denied”, despite the fact that yesterday’s postponement was the result of a request from his new legal team to prepare an application for a stay of prosecution.

The initial onset of the case was also delayed for several years while he brought numerous legal challenges to prevent it, prompting some bemused responses from opposition parties.

“It is the view of the EFF in KZN that Zuma is playing games as usual. He is trying to avoid facing the full might of the law and he is trying to rape justice. He has always said that he wants to have his day in court and now he is playing these games.”

But while he now has three months’ reprieve from appearing in court, it has been announced that the long-awaited commission of inquiry into state capture, which is the result of one of his final acts as president, and in which he is one of the main people of interest, begins in just a few weeks.

Yesterday, Deputy Chief Justice Raymond Zondo announced that the judicial commission of inquiry into allegations of state capture would officially begin on August 20.

While the commission was initially given just 180 days to complete its work, earlier this week the High Court in Pretoria granted the commission’s request to extend the inquiry for a further two years.

Judge Mjabuliseni Madondo adjourned the matter after Zuma’s new legal team indicated their intent to lodge an application for a stay of prosecution based on, among other factors, political interference as well uncertainty over the payment of his legal fees by the state.

This last argument is related to the Democratic Alliance launching a court challenge in May this year against a 2006 deal, signed by Zuma, allowing for the state to foot Zuma’s legal bill when he first faced the same corruption charges.

President Cyril Ramaphosa indicated that the state would continue to pay for the former statesman’s representation until a court decided otherwise.

Yesterday, Madondo ordered Zuma’s legal team to file papers in their application for a stay of prosecution by November 16.

Kylie Adam of Jurgens Bekker Attorneys pointed out that a successful application for a stay of prosecution would result in the state being barred from prosecuting the accused until such time as the defects and/or circumstances complained of are remedied and/ or rectified.

This being the third delay since the case commenced again this year, the postponement was seen by opposition parties as typical delaying tactics by the beleaguered former president, but Adam argued that given the nature of the application, the court had little choice.

“Because applications to stay the prosecution have been described by the Constitutional Court as ‘radical applications’, the court had to afford Zuma’s legal representatives a reasonable opportunity to prepare them.

“Regardless whether society sees three months as an excessive period, the court had the duty to provide a reasonable and fair time period for Zuma’s new legal representatives to apply their minds to the application.”

Another legal expert, Advocate Zola Majavu, said Zuma’s new legal team – comprising of four senior counsel, a junior counsel, and an instructing attorney – was not unusually large. But Adam said it was not the norm.

“In complex matters, a legal team will usually comprise one senior and one junior counsel and an instructing attorney,” she said, pointing out that Zuma’s defence was being funded by the state.

“Firstly, the state is not paying for the entire legal team, it is paying for two senior counsel, and that is not unusual … we have seen [it] before,” he said.