Supporters walk from Sandton to Soshanguve in fight against nyaope

The majority of drug users in Soshanguve are scared to seek medical help as they feel stigmatised for their addiction. 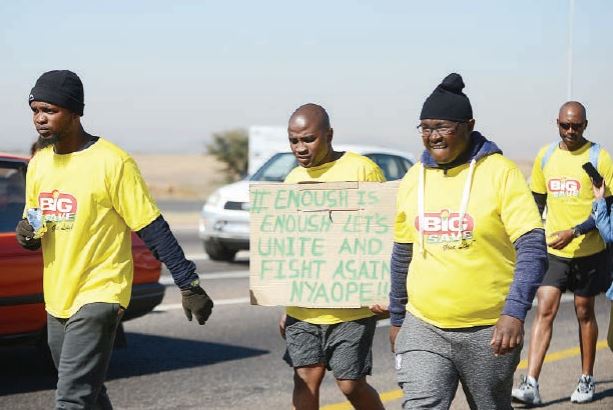 Members of The Clean Up Squad heading for Soshanguve after departing from Sandton on Friday. Picture: Rorisang Kgosana

Nyaope addicts in Soshanguve were inspired to change their lives when they met with Reikhutsitse “Khutsi” Malala, who walked over 24 hours from Johannesburg to raise awareness about the blood-sharing nyaope phenomenon nicknamed “bluetooth”.

Malala’s organisation, The Clean Up Squad, collaborated with Mamelodi-based Thandanani Drop-Off Centre and members of the public to walk over 130km from Johannesburg to Soshanguve, to assist in fighting nyaope addiction in the capital. The group departed from Sandton at 4am on Friday morning.

Speaking to The Citizen while limping on the R80 Mabopane Highway, just a few kilometres from his final destination Soshanguve, Malala, a former journalist, was concerned that the drug phenomenon promoted HIV/ Aids, since users would sometimes share the same needle for up to three months.

He said the majority of drug users in his neighbourhood Soshanguve, often caught the virus and were scared to seek medical help as they felt stigmatised for their addiction.

Arriving in Mamelodi on Friday night, Malala spent the night with addicts at a hostel in Denneboom, where most confessed they turned to the drug because of broken homes and families.

“Most heroin addicts in America who kick the habit do so because they returned to functioning families and found love from their family members. This walk was to show addicts that it’s about mind over matter.

“We have people who quit nyaope without going to rehab, but by staying at home with their loved ones. We hope because of this walk, addicts will go to rehab out of their own will,” he said.

A Rietgat police officer, Litha Malungane, who attended in his personal capacity, said he joined the walk because the drug was destroying the community.

“If we managed to walk all the way from Johannesburg, then anything is possible. It’s about switching on your mind,” he told The Citizen.

Addicts gathered at the intersection leading to Soshanguve, where they attentively listened to Malala, who encouraged them to be cautious of their well-being and to steer away from drug use.

Lucky Mahlangu ,29, told The Citizen he was inspired by Malala’s efforts in his own fight.

“To be honest, we want to quit this drug because we know it is setting us back. We are always considering rehab and if there are people wanting to help us, we will take the help. I am touched because some of these guys are church people and walk all the way here just to pray for us,” Mahlangu said.

'Dodgy' Bosmont centre for abuse survivors to be shut down after drug allegations
2 months ago
2 months ago
PREMIUM!

'Dodgy' Bosmont centre for abuse survivors to be shut down after drug allegations
2 months ago
2 months ago
PREMIUM!