‘I poisoned my kids in despair,’ murder-charged mom tells court

Thobile Mbatha denied guilt to charges of murdering her baby and attempting to murder her older son. 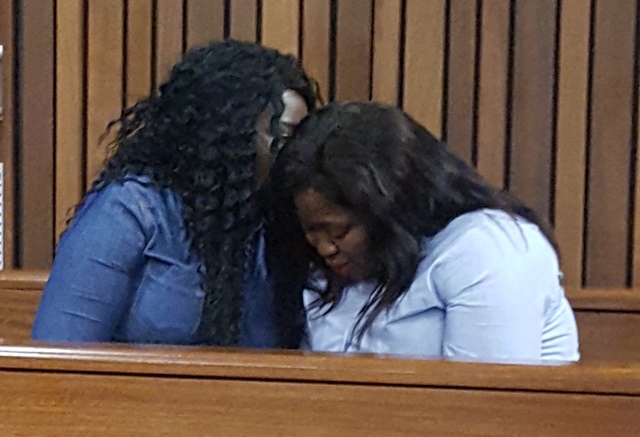 A relative consoles Thobile Mbatha after she became distraught while testifying in her murder trial in the High Court in Pretoria, 2 October 2018. Picture: Ilse de Lange

A 29-year-old Tsakane woman yesterday sobbed inconsolably as she told the High Court in Pretoria about the circumstances which led to her feeding rat poison to her two young children.

The court adjourned for a while so that Thobile Mbatha, a former police officer, could calm down.

Mbatha admitted to mixing rat poison with yogurt and feeding it to her 10-month-old baby son, Mapempeni Madoda, and her three-year-old son, Siyamthanda Mbatha, in September 2016. She said she had also taken poison and that her intention was for all of them to die.

Her baby died shortly after being admitted to hospital but her older son survived and now lives with her aunt.

Mbatha denied guilt to charges of murdering her baby and attempting to murder her older son. She insisted she had not planned to kill her sons, but that she had poisoned them in a state of desperation because of her marital and financial problems.

She testified that she had loved her husband and believed he was faithful until a woman phoned her in 2012 to say she was pregnant with her husband’s child. Although her husband, a police officer, told her he was not involved with the woman anymore their marital relationship was not the same after that and they often argued about the affair, which resulted in him assaulting her.

Mbatha said she had decided to take poison after finding a receipt revealing that her husband and the woman were renting a property together, while she and the children lived in a room with his family.

Also, her new car had been repossessed because he had crashed the previous one and refused to assist her financially.

She had decided to kill her children to avoid leaving them behind as she thought no one would look after them the way she did, she added.

She admitted to waiting two hours before taking the children to a clinic and then a hospital, but denied that she did not admit to poisoning them until it was too late. The trial continues.