12-year-old boy drowns after trying to rescue his dog 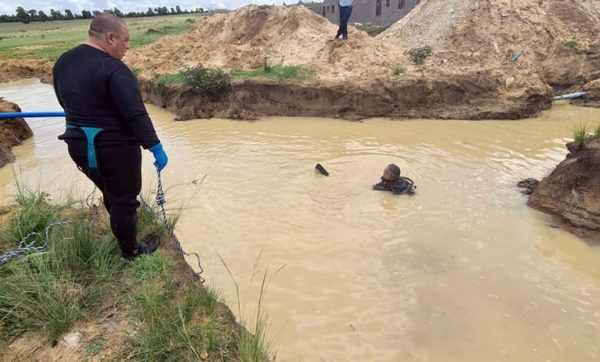 Emergency services are at the scene where a 12-year-old boy drowned after trying to rescue his dog in Breyten on 11 January. (Photo: Delta 1 Rescue Diving)

A 12-year-old boy drowned on 11 January in a trench which was allegedly left open by a contractor who was doing some work around Kwa-Zanele’s new Ext 6, in Breyten.

According to police, a group of boys were playing around the trench which was full of water due to recent heavy rains.

Sgt Thabo Mashegoane, spokesman for Breyten Police, said: “When the victim’s dog went into the trench, the boy took off his clothes and attempted to rescue his dog, but lost his footing, fell in and drowned.”

According to Mr Andries Lee, one of the directors of Delta 1 Rescue Diving, they received the call around 12pm.

Mr Lee said: “We went to the construction site where pipes were being laid.”

This article was republished from Ridge Times with permission