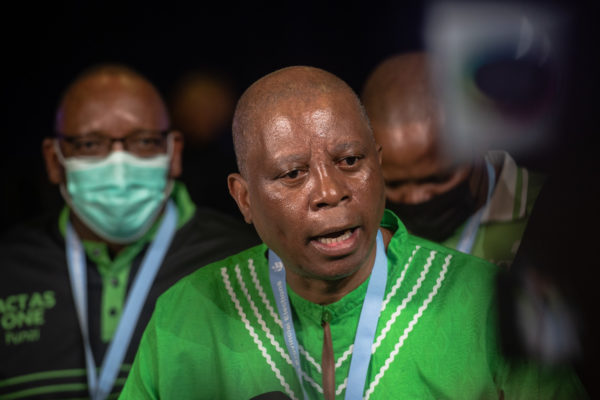 After ruling out the ANC as a possible coalition partner in hung municipal councils, ActionSA on Tuesday revealed that it had held informal coalition talks with both the Democratic Alliance (DA) and the Economic Freedom Fighters (EFF).

But ActionSA’s president Herman Mashaba, speaking at a media briefing in Johannesburg, said they were not desperate to enter into coalitions.

He said his party was “happy to be in the opposition benches” if they do not find coalition partners that are willing to work with them.

It was an eventful day for Gautrain passengers on Tuesday after they were left stuck in queues, and in some cases, underground in a train, as Eskom continues to leave South Africans in the dark with the implementation of load shedding.

Gautrain passengers took to social media to share videos and pictures of the dark situation in different stations, as some shared their frustrations over the delays of trains.

Eskom CEO Andre de Ruyter says he will not voluntarily resign from the power utility.

Responding to calls for him to resign at the power utility, De Ruyter said changing the jockey on a dead horse will not help the matter. In fact, it is better to allow for the continuation of the current management to deal with the crisis.

Will Hlophe’s impeachment vote in Parliament be held via secret ballot?

Giving an update on the progress of the impeachment during a programming committee meeting on Tuesday, National Assembly secretary Masibulele Xaso suggested that a secret ballot may be held for the proceedings.

This comes after the National Assembly’s legal services unit provided an opinion on whether Speaker Nosiviwe Mapisa-Nqakula has the discretion to allow a secret ballot in respect of the removal of a judge.

The deadline to finalise your personal income tax is just around the corner. The deadline is on 23 November and the South African Revenue Service (Sars) has warned that penalties will be levied on taxpayers who fail to submit their returns on time.

“Taxpayers must note that according to changes in legislation, Sars will levy penalties from 1 December 2021 where one or more returns are outstanding,” said the tax collector.

Before the change in the legislation, Sars could only levy penalties where two or more returns were outstanding.

The older rule will remain in place for one more year for 2020 and earlier returns.

The City of Johannesburg in 2008 reportedly agreed to sell three hectares of prime land in central Sandton to a politically connected consortium for R280 million. But some 13 years later, the buyer of the land has yet to pay the city the purchase price.

Investigative journalism news outlet amaBhungane reported on Tuesday that the developer of the land, the Regiments Kgoro Consortium, took possession of the land in 2013 and no development ever happened, resulting in the project going into liquidation.

The land, which is above the Sandton Gautrain station, is now apparently out of the city’s ownership and is set to be sold by the liquidator.

Cocaine worth R200m stolen from Hawks offices in KZN

Drugs stored at the Directorate for Priority Crime Investigation (Hawks) offices in Port Shepstone have been stolen by enterprising thieves who were able to gain entry through a window.

It appears as though the suspects gained entry to the building by “forcing open the windows”.