Tracing operations by police to track down the suspects and recover stolen items are currently under way, according to a police spokesperson. A Metro Police officer forces a man who was hiding in between buildings to go home in the Cape Flats area of Cape Town, on March 30, 2020, during a patrol to enforce the 21-day nationwide lockdown in Sout Africa. Picture: PIETER BAUERMEISTER / AFP

Western Cape police have reinforced deployments in several townships on the Cape Flats after several incidents of burglary, looting of grocery stores and public violence on Tuesday afternoon.

According to police spokesperson Brigadier Novela Potelwa, a group of about 16 people stormed a supermarket in Gatesville at about 2.40pm on Tuesday, threatened cashiers and took five cash registers with cash and groceries.

“Athlone police responded promptly and four suspects aged between 21 and 24 were arrested and some stolen items recovered,” Potelwa said.

In Manenberg, large crowds took to the streets and broke into two wholesalers in the township, allegedly helping themselves to grocery items.

Tracing operations by police to track down the suspects and recover stolen items are currently under way, said Potelwa.

“Public order police in Mitchells Plain have been dealing with sporadic protests in Tafelsig [on Tuesday] that started mid-morning. Large crowds took to the streets in protest against food parcels distributed to some communities within the broader Mitchells Plain townships.

“Tyres were burnt, roads barricaded and police pelted with stones. Three suspects aged 16, 18 and 20 were arrested for public violence.”

All the arrested suspects are expected to appear in court soon.

“The Western Cape SAPS management is cautioning communities against criminal conduct. The police will not hesitate to take decisive action against those breaking the law. Forces will remain at identified locations until calm is restored,” Potelwa added.

News24 on Tuesday reported that multiple shops in Manenberg were looted by large groups of people during the third week of the nationwide Covid-19 lockdown, according to eyewitnesses.

Multiple videos have been doing the rounds showing the apparent looting.

According to one eyewitness, children were running on top of cars to get their hands on goods inside a shop that was being looted.

A shop owner named Nayan, originally from Bangladesh, said he had never experienced anything like it in South Africa before.

He said he had lost between R25,000 to R30,000 worth of nappies, baby formula, coffee and cash by the time the police arrived.

When News24 arrived on the scene on Tuesday, a large police presence was on the road, while some residents and children were still out and about despite the lockdown.

A woman claimed other areas had been given food, “but not us”, as neighbours warned of the approaching police with low whistles.

An army truck joined police Nyalas and law enforcement vans, weaving their way through the barricades in Tafelsig.

“Gaan in [Go in!]!” shouted a man to a youngster out to watch the action.

Told to go inside, some children chanted “we want food”.

Dogs scurried away and children climbed onto roofs to watch law enforcement personnel speed up and down the road, while others walked with rifles over their shoulders.

“What are you doing out here?” asked an officer, ordering people back inside their homes.

People regrouped in various parts of Tafelsig, and after armoured vehicles sped after them, they ran into the small streets and disappeared. 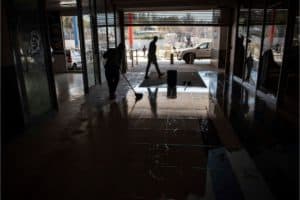 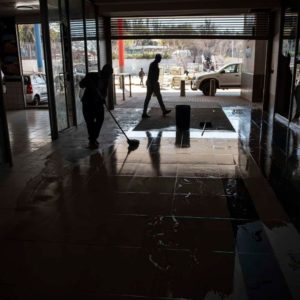 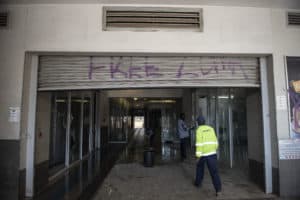 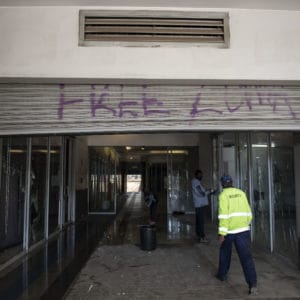