UPDATE: Cheetah run over in Kruger Park was part of well-known brotherly duo

The cheetah that was run over was one of two brothers that were a regular attraction at the Punda Maria t-junction. 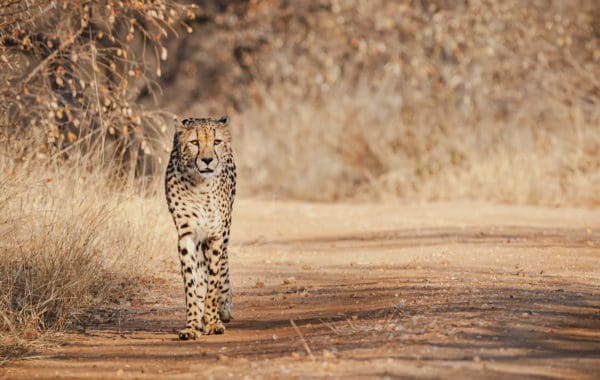 A motorist was arrested on Friday night after running over a cheetah in the Kruger National Park (KNP).

In a media alert, issued on Saturday morning, the park urged visitors to be “extra vigilant and to observe the speed limit in the parks”.

Not much detail was provided at the time, due to Vlakteplaas rangers still attending to the scene of the accident, but the incident was said to have taken place near Punda Maria.

The KNP did confirm that a case had been opened with police.

Kruger Park communications and marketing GM Isaac Phaahla told The Citizen on Sunday morning it is not always possible to arrest those who exceed speed limits or kill wildlife with motor vehicles in the park, but that this incident was a bit different.

“We sometimes do not get to see the culprit, therefore making it difficult to affect an arrest.

“Fortunately rangers driving in the opposite direction noticed the damage of the car, and then found the carcass of the cheetah.”

He said rangers then radioed security to stop the car at the gate.

In addition, Phaahla said cheetahs are an endangered and therefore protected species, which meant charges had to be laid.

The International Union for the Conservation of Nature has classified the cheetah in South Africa as vulnerable, with populations actively decreasing.

The run over cheetah was one of two brothers that were a regular attraction at the Punda Maria t-junction.

Phaahla said the cheetah brothers were skittish at first, but slowly became more confident with tourists and vehicles.

He said the incident was preventable, and very upsetting.

He appealed to visitors to adhere to speed limits, saying the park had embarked on speed campaigns over the past 10 months, but people continue to drive fast.

The maximum speed allowed in the park on gravel roads is 40km/h, and 50km/h on tarred roads.