Taxi violence: Gauteng urged not to give same routes to different associations

The Gauteng government has since obtained an interdict to stop taxi violence in Johannesburg. 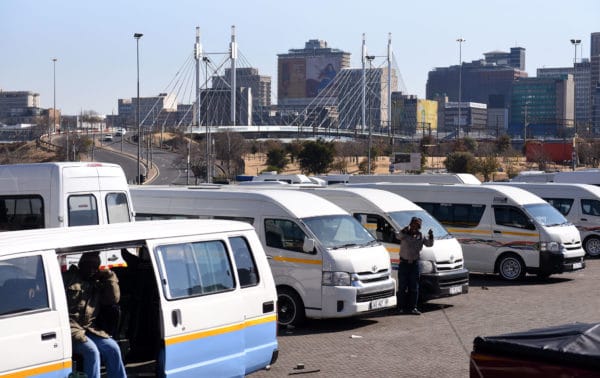 The South African National Taxi Council (Santaco) has urged the Gauteng government not to allocate the same routes to different taxi associations in an effort to avoid disputes.

This is after four taxis were torched and six damaged in the Johannesburg CBD, while two taxis were also set alight in Soweto on Saturday.

Operations were suspended after several taxi owners were assaulted during the chaos. Some have now opened cases of malicious damage to property.

WATA has since blamed government for causing violence.

Reacting to the incidents, Santaco urged the provincial government to find a situation to avoid disputes, suggesting that Gauteng should avoid giving the same routes to the associations.

The SABC also reported that Santaco would conduct its own investigations into the violence.

“They will publically explain what has happened and what their intentions are. They will be apologising. Law enforcement must take its course and ensure they are brought to book,” he told CapeTalk.

ALSO READ: Taxis do govt’s work on public transport, should get subsidies

Malele said the NTA wanted the associations merged into one as suggested by the commission of inquiry into taxi violence.

“We will have to follow [the] recommendations [of the recent commission on taxi violence that was led by Judge Shongwe]. [These recommendations] speak to the amalgamation of both associations into one so that there is everlasting peace in the industry,” he said.

Both Santaco and the NTA in Gauteng agreed to sign an agreement in August last year committing themselves to modernising the industry and allowing government to intervene in the unstable taxi turf conflict.

The Gauteng department of roads and transport on Monday obtained an order interdicting the violence between the two associations.

The interdict order, granted by the Johannesburg High Court, states the “chairpersons and their members are interdicted from preventing, obstructing or interfering with the rights of taxi operators”.

This includes taxi operators active between Soweto and the Johannesburg CBD.

The transport department approached the court on an urgent basis over the weekend to ensure the South African Police Service (Saps) were authorised to step “take necessary steps”.

Gauteng transport and roads MEC Jacob Mamabolo urged authorities to “enforce the law, hold criminals accountable and secure the safety of commuters and other road users”.

Mamabolo said all parties involved agreed to “urgently address the root cause of the violence, which are disputes over routes”.

“We believe that problems in the industry are not insurmountable and that through negotiation and consultation, we will create a taxi industry of the future,” he said.