In a parliamentary question, DA MP Kobus Marais also wanted to know if the presidential jet Inkwazi was out of service. 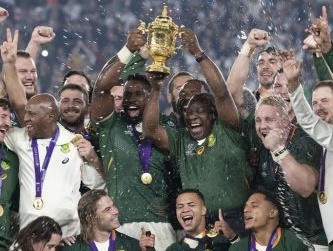 World Cup champions, the Springboks, may end up facing hosts, France, in their pool at the 2023 World Cup. The draw is on Monday. Picture: SASPA

The public is not allowed to know why President Cyril Ramaphosa flew to Japan for the Rugby World Cup final in a chartered aircraft, how much it cost, and whether the presidential jet is out of service.

He also wanted to know what the total cost of the exercise was and from which budget item in the Department of Defence’s budget it would be funded.

In addition, Marais wanted to know if presidential jet Inkwazi was out of service, and if so, why and by when would it be ready to fly again.

“The question requires a closed session of the Joint Standing Committee on Defence as it relates to the security and movements of the VVIP,” is all that Mapisa-Nqakula said in response.

The presidential jet has often been a controversial topic.

In March 2018, Ramaphosa expressed his unhappiness to Mapisa-Nqakula about the use of private jets on an official trip to Botswana earlier that month. He used a jet which Moti Company owned while the presidential jet Inkwazi was repaired.

Two months later, Defence Secretary Sam Gulube said the VVIP jet was required, but its purchase had to be within budget, which was cut that year from R51bn to R47bn.

However, it appears that Ramaphosa has made use of Inkwazi since March 2018.

In 2015, replacing Inkwazi at the cost of R4bn was mooted, which was met with much public derision.