Mabuza’s choice to get treated in Russia is none of your business, Ramaphosa says

Ramaphosa confirmed that the state was responsible for Mabuza's security and travel arrangements during the six weeks that he was in Russia. 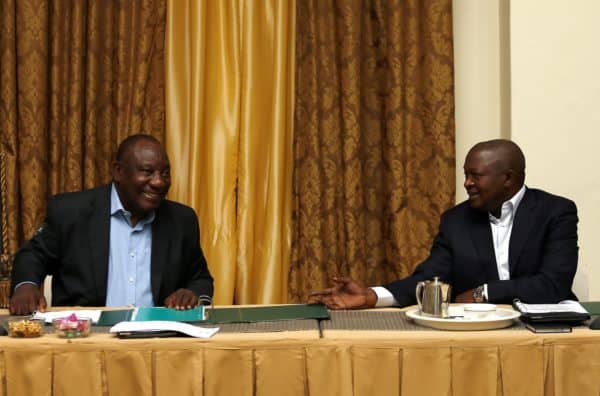 Deputy President David Mabuza is entitled to seek medical assistance in any country of his choosing.

That is according to President Cyril Ramaphosa, who defended Mabuza’s recent medical trip to Russia.

“Where he gets his treatment, in the end, honorable Steenhuisen, it’s a personal choice. Just as anyone would choose which doctor should treat them, which dentist should treat them, they’re entitled because it affects them personally.

“And they need to feel that they can get whatever treatment best from whatever medical practitioner,” Ramaphosa said.

The president was responding to a question from DA leader John Steenhuisen during a virtual question and answer session in the National Assembly. Steenhuisen wanted to know whether the state footed the bill for Mabuza’s medical trip to Russia.

‘It comes with the job’

Ramaphosa confirmed that the state was responsible for Mabuza’s security and travel arrangements during the six weeks that he was in Russia.

This was contradictory to denials from Mabuza’s office, which stated that taxpayers did not foot the bill for his trip.

Ramaphosa said: “The deputy president is entitled to security wherever he is, including the president. And this we don’t choose to be continuously shadowed by security people.

“It is a requirement, because it is taken that when we are in the positons that we are in, we’ve almost become state property… it is what comes with the job.”

He said wherever the deputy president or the president goes, at any given time, their transportation is the responsibility of the government.

Ramaphosa slammed Steenhuisen saying he was entitled “to get into tirades” and make statements about various members of the National Assembly. However, he said the DA leader had to exercise some measure of kindness when it comes to Mabuza’s health challenges.

“The deputy president was not well for quite some time and this I know because I got involved in granting him leave so that his health can be restored,” he said.

Ramaphosa said Mabuza had to travel to Russia for medical assistance because he was not well. He said he found Steenhuisen’s questions to be unkind and terrible.

“When somebody is not well to be subjected to the types of attacks that honorable Steenhuisen is subjecting the deputy president to, I find that not only unkind, but I find that quite terrible really, because we’ve been talking about somebody who was not well.”

READ NEXT: Nothing to worry about – Deputy President David Mabuza is doing well

'We have enough vaccines,' says SAMA after Sputnik V rejection over HIV fears
6 hours ago
6 hours ago

Ramaphosa tells voters he has 'no problems in the bedroom'
9 hours ago
9 hours ago
PREMIUM!

'We have enough vaccines,' says SAMA after Sputnik V rejection over HIV fears
6 hours ago
6 hours ago

Ramaphosa tells voters he has 'no problems in the bedroom'
9 hours ago
9 hours ago
PREMIUM!