ANC veterans and activists say it is time to defend SA's democracy and Constitution against attack. 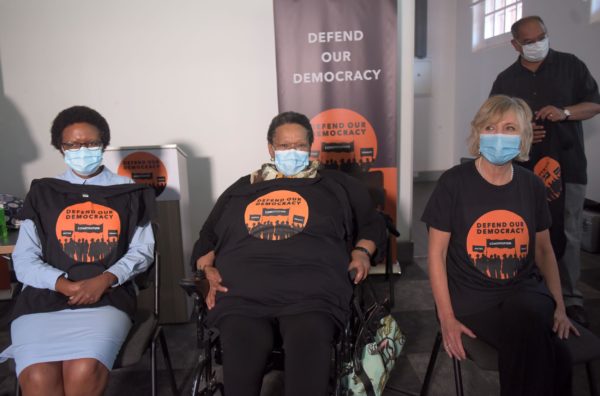 A group of politicians, academics and struggle stalwarts have launched “Defend our Democracy” campaign, in response to what they call a direct attack on South Africa’s Constitution by former president Jacob Zuma.

Among the prominent South Africans who have endorsed the campaign are Bishop Ziphozihle Siwa, Judge Thumba Pilay and former Democratic Alliance leader Mmusi Maimane. Organisations such as trade union federation Cosatu, Black Lives Matter Foundation, the Desmond and Leah Tutu legacy foundation have also lent their weight to the campaign.

Speaking at the launch event at Constitutional Hill in Braamfontein on Thursday afternoon, former South African ambassador to the United States and ANC veteran, Sheila Sisulu, said for more than a decade parliamentary and political accountability, particularly under the governing party, has been seriously undermined.

Sisulu criticised government, saying signs of their increasing inability to protect citizens have led to increased anxiety among the populace, while political heavyweights used their clout to undermine the Constitution.

“Recently a former president described in a constitutional court judgment as embodying the ‘constitutional being’ of the republic, defied an order of the same court instructing him to continue providing witness testimony at the Commission of Inquiry into State Capture,” Sisulu said, referring to Zuma.

Former struggle activist and chair of the South African National Parks Board, Murphy Morobe, said the time has come for South Africans to step out of the background and become active in defending the Constitution.

They hope their call to unite will see thousands of people join the organisation in a symbolic virtual gathering on Human Rights Day by wearing orange masks and flying orange flags.

The campaign is also calling on its members to join them next week Thursday where they will host another initiative for citizens to show their support against the assault of the Constitution.