The party says WhatsApp messages showed those behind the attacks intended to destabilise and remove the current government. 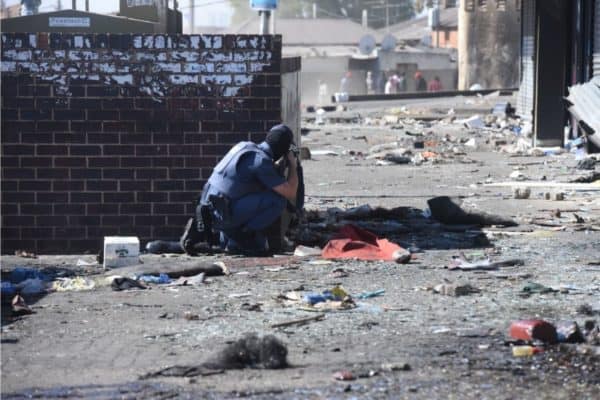 The Democratic Alliance (DA) is set to lay charges of treason and terrorism against the instigators of incidents of looting, violence and destruction of property that engulfed parts of KwaZulu-Natal and Gauteng this past week.

This is after acting Minister in the Presidency Khumbudzo Ntshavheni revealed on Thursday that one of the 12 people who are believed to be the instigators of the violence is in police custody.

Ntshavheni said the police were now on high alert for the remaining 11 suspects.

According to Daily Maverick, the instigators used WhatsApp and Telegram in order to carry out their strategic planned attacks.

TimesLive reported that the “Shutdown eThekwini” WhatsApp group was created only a day after former president Jacob Zuma was admitted to the Estcourt Correctional Centre in KwaZulu-Natal to start serving his 15-month jail sentence for contempt.

Now, the DA plans to take action against the instigators by laying treason and terrorism charges.

“There can be no other course for the DA than to lay charges of treason and terrorism against these individuals who showed a complete lack of regard for the lives they were endangering and the livelihoods they would destroy in their ill-considered attempt at overthrowing President Cyril Ramaphosa and their own ANC government,” DA MP Glynnis Breytenbach said in a statement.

Breytenbach said the WhatsApp messages showed those behind the attacks intended to destabilise and remove the current government.

“The DA believes that these messages show that the instigators intended to commit acts of terrorism and went about it in a very methodical way.

“Under South African law, treason is defined as any conduct unlawfully committed by a person owing allegiance to a state with the intention of overthrowing the government; coercing the government by violence into any action or inaction; violating, threatening or endangering the existence, independence or security of the country; and changing its constitutional structure,” she said.

It is alleged that Zuma’s ex-bodyguard, Thulani Dlomo, was one of the prime suspects of the “well-orchestrated economic sabotage”, according to News24.

READ MORE: We are going after the instigators of violence,’ says a bullish Ramaphosa

Dlomo – who is the former head of a State Security Agency (SSA) special operations unit – is one of the instigators that are being investigated by the agency for carrying out the “modus operandi”.