Refiloe Nt’skhe cited poor service delivery, failures in its cadre deployment policy and corruption as areas of weakness in the ANC. 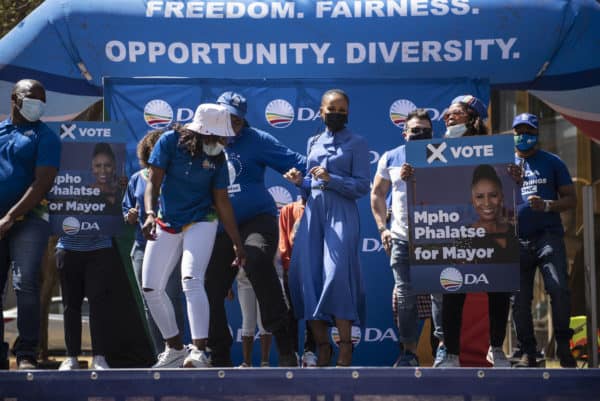 Deafening chants of “amandla” (power) and “viva DA” reverberated through a packed Springs marquee as the opposition party yesterday launched its campaign for “the takeover of Ekurhuleni” in the upcoming local government elections.

The Democratic Alliance’s (DA) mayoral candidate Refiloe Nt’skhe citing the ANC’s poor service delivery record, failures in its cadre deployment policy and levels of corruption as areas of weakness in the governing party.

Nt’skhe told the clapping audience, which included DA federal council chair Helen Zille, that she was “ready to get things done for the people of Ekurhuleni”.

Describing Ekurhuleni as “the epitome of lack of political will to get things done”, Nt’skhe told supporters: “It has become the epicentre of service delivery collapse and failure.

“It is riddled with green-andgold standard of cadre deployment, corruption, financial waste and mismanagement.

“Residents of this municipality have been short-changed with service delivery by those who currently hide in the corridors of power – far from the plight of ordinary citizens.

“Since hitting the campaign trail a little under a month ago, I have travelled … from Tsakane in the far east to Katlehong in the south of Springs, to Mid-Stream in the north.

“During my travels, I have been meeting residents – listening to their frustrations, disappointments and witnessing first-hand the decay of this once economic powerhouse.”

Power cuts, said Nt’skhe, were the biggest challenge for residents in Ekurhuleni.

“Daily, there are well over 1 000 power outages in the municipality.

“Some of these outages have been known to last up to six days.

“How are residents, industry and the economy to survive when the power grid is unstable?

“Some residents of Katlehong have been without electricity for the last five months.

“Ratepaying residents with electric appliances such as fridge, washing machine, microwave and stove, have been reduced to cooking with a paraffin prima stove,” said Nt’skhe.

“Wadeville, which is a key industrial area, has in this financial year alone been hit with a cumulative 65 hours without
electricity.

“Sometimes when power is out, the damage to the equipment costs millions – 10 to 15 days to replace.

“While staff salaries are paid by month-end, there is no productivity and market supply met.

“This is how those who wear green and gold are destroying jobs.”

ALSO READ: John Steenhuisen who? The DA has an identity crisis

She said her long-term vision was to “free Ekurhuleni from the shackles of Eskom”.

“Freeing Ekurhuleni from Eskom means learning from DA-run sister governments – taking advantage of the Promulgated Act 10, like Stellenbosch is doing, by building a base of independent power producers.

“Stellenbosch has incentivised business to fit rooftop solar panels on their properties to feedback into the power grid.”

Taking a swipe at current Ekurhuleni executive mayor Mzwandile Masina, Zille said: “Mzwandile Masina said he would
resign if Cyril Ramaphosa got elected in 2017. We are still waiting. He can’t get things done – he can’t even resign.

“When the mayor said he would resign when Ramaphosa got elected and four years later he has not resigned, then you know he can’t get things done.”