It was clear the residents were part of a political ploy to destabilise the city as they had no issues to raise, the mayor said after being chased away. Residents from the Gomorrah township are seen reacting alongside the police Nyala where Tshwane Mayor Stevens Mokgalapa is aboard to address them, 12 April 2019, Pretoria. Picture: Jacques Nelles

It appeared the violent protesters in Pretoria West were not keen to resolve their issues as they chased away Tshwane Mayor Stevens Mokgalapa when he went to address them yesterday morning.

Gomorrah informal settlement residents in Pretoria West had joined in the sporadic #TshwaneShutDown protests that erupted across the capital since Thursday, throwing stones at the police and members of the media while demanding service delivery.

The angry protesters had burned and ransacked a local church on Thursday, prompting Mokgalapa to address them and hear their issues yesterday. 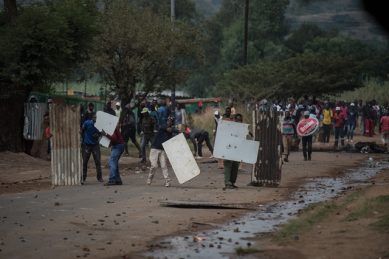 The violence, however, continued yesterday with residents using corrugated iron and doors as shields from police’s rubber bullets.

But when Mokgalapa arrived, he was lured into the informal settlement by the residents who had urged him to come in to witness their woes.

Escorted by the public order police in a Nyala, he was taken into the heart of the protests. As soon as he stuck his head out through the armoured vehicle, the protesters started swearing and yelling at him to leave while a resident could be seen hitting the police vehicle with a plank. 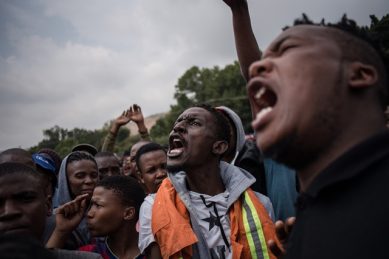 Residents from Gomorrah township are seen reacting alongside the police Nyala in which Tshwane Mayor Stevens Mokgalapa travelled to address them, 12 April 2019, Pretoria. Picture: Jacques Nelles

Mokgalapa was immediately escorted out of the area while violence continued when media and police were pelted with rocks.

But it was clear the residents were part of a political ploy to destabilise the city as they had no issues to raise, the mayor said.

Speaking to The Citizen, he said the residents instead demanded the release of their fellow protesters who were arrested for public violence on Thursday. 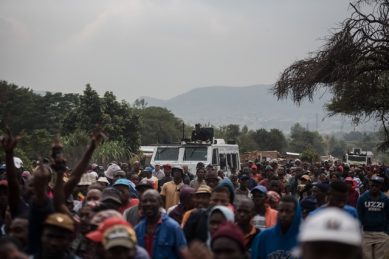 Gomorrah residents have over the years protested for ablution, water and electricity services, which Mokgalapa said would be solved starting from next week.

The mayor said the metro and province have identified four portions of land in Zandkloof, which would be electrified and bulk infrastructure would be installed.

“The contractor will be on site on Monday,” he said. “We will be electrifying from July 1 and we will give them prepaid meters as my strategy is to upgrade informal settlements.” 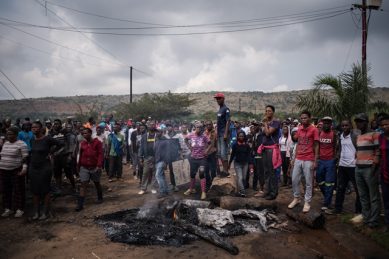 Residents from Gomorrah township are seen protesting while they await the arrival of Tshwane Mayor Stevens Mokgalapa to address them, 12 April 2019, Pretoria. Picture: Jacques Nelles

The sporadic protests come a day after the Tshwane ANC leader Kgosi Maepa gave his own state-of-the-capital address in Hammanskraal on the eve of the formal address tabled by Mokgalapa.

Maepa had warned residents of “imminent” service delivery protests ahead of the May 8 elections.