According to the South African Police Service, the latest deaths were of people succumbing to injuries sustained during the riots. 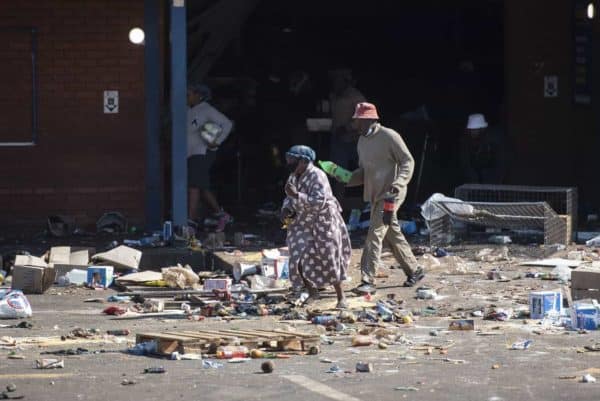 Rioting and protests in South Africa this month has claimed 337 lives, the government said on Thursday, marking a further jump in the death toll from the 276 announced the previous day.

“The South African police has revised the total number of deaths in Gauteng [province] to 79 and KwaZulu-Natal to 258 as related to the unrest,” said Khumbudzo Ntshavheni, a minister in the president’s office.

She added that some of the latest deaths were of people succumbing to injuries sustained during the riots.

Widespread looting and burning of businesses broke out earlier this month, a day after former President Jacob Zuma began serving a 15-month jail term for ignoring a corruption inquiry.

The violence escalated into the worst unrest since the end of apartheid, prompting President Cyril Ramaphosa to label it an attempted “insurrection”.

Violent protests spread through Zuma’s home province KwaZulu-Natal and Gauteng – the two most populous provinces, which together account for half of South Africa’s economic output.

Zuma was on Thursday allowed to briefly leave jail in the southeastern town of Estcourt to attend the funeral of his brother Michael, who died from an illness several days after the ex-president was put behind bars.

The violence has abated, and six people including a radio DJ have so far been arrested on charges of incitement to commit public violence. Several thousand more are being held for looting and arson.

The scale of the destruction and loss of life, which was fuelled by poverty and inequality that have persisted for almost three decades since the end of apartheid in 1994, is still becoming clear.

Authorities have managed to bring the violence under control. But the economic cost is estimated at 20 billion Rand ($1.36bn) in KwaZulu-Natal alone, as 161 shopping malls, 11 warehouses and eight factories were extensively damaged.

The extent of the damage in Gauteng is still being collated.