Vermeulen excited about having Coetzee in Bulls loose-trio

"Marcell has great energy on the field and I’m really looking forward to playing with him again," said the Bulls captain. 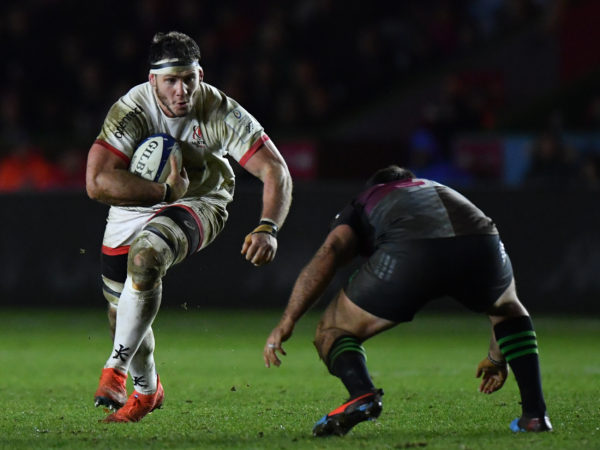 Former Ulster star Marcell Coetzee has joined the Bulls and will play alongside another hard man of South African rugby, Duane Vermeulen, on Friday night, against the Stormers. Picture: Ashley Western/MB Media/Getty Images

Duane Vermeulen must be used to being the object of huge admiration from rugby fans by now, so it was nice on Thursday to hear the talismanic Springbok eighthman almost gush over the prospect of teaming up with Marcell Coetzee for the first time in the Bulls’ loose-trio when they take on the Stormers in their massive Rainbow Cup clash at Loftus Versfeld on Friday night.

Coetzee, who earned himself legendary status at Ulster when he moved there from the Sharks in 2016, will make his debut for the Bulls on Friday night in a highly-anticipated North/South derby that could well decide who wins the South African leg of the Rainbow Cup.

Vermeulen and Coetzee will be hoping to reproduce their epic performance for the Springboks back in 2014 when they beat the All Blacks 27-25 at Ellis Park to end a five-game losing streak against their great rivals. Vermeulen was immense despite playing with cracked ribs and won the man of the match award.

“Marcell has good character, he has great energy on the field and I’m really looking forward to playing with him again,” Vermeulen said on Thursday.

“He’s a good ball-carrier, he has pace to the ball. He’s actually just a really well-rounded player – he tackles and carries the ball well, and can play to the ball.

“And it’s going to be nice to have young Elrigh Louw playing with us, he can learn a lot from Marcell now too. Marcell is really experienced and he can back me up on decision-making as well.”

Vermeulen is no stranger to playing with pain to this day, and Bulls coach Jake White said it was the courage of his captain that eggs his team-mates on to greater heights.

“Every week Duane is in the doctor’s room getting things drained out of his knee,” White said.

“He could hold back every week, he could say ‘Coach, I need a break’. But he always fronts up, it’s why he has achieved what he has and with that sort of leader I know I’ll have no problem with any other players. I don’t feel like anyone is not going to put their body on the line and give their absolute best.”

The coach was similarly excited about being able to pick Coetzee, saying he can play in each of the loose-forward positions, but adding the Bulls’ combination of Vermeulen, Louw and Coetzee, with Marco van Staden on the bench, is probably the best in global club rugby.

White also praised his conditioning staff for ensuring Coetzee and fellow Springboks Ivan van Zyl and Gio Aplon have all been able to return to action in a crucial match in which the Bulls will need all the quality they can get against a powerful Stormers team that is gaining momentum.

Will it be derby December for SA's URC teams?
5 hours ago
5 hours ago

Will it be derby December for SA's URC teams?
5 hours ago
5 hours ago