Gatland reacts to first loss by Lions: ‘We finished the stronger team’

"We finished the stronger team and they wilted a bit," said the New Zealand-born coach. 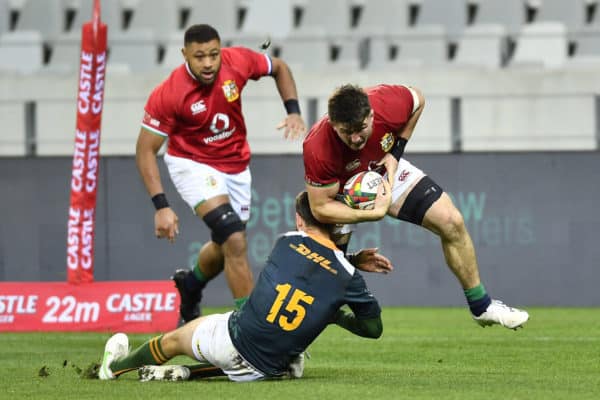 Tom Curry of the British and Irish Lions is tackled by Willie le Roux of South Africa A during the teams' match in Cape Town on Wednesday. Picture: Ashley Vlotman/Gallo Images

British and Irish Lions coach Warren Gatland said his players were “pretty bullish” despite losing 17-13 by South Africa A at the Cape Town Stadium on Wednesday.

“I thought we got more out of tonight than South Africa,” said Gatland. “The players were pretty bullish in the changing room.”

But, he said he expected the three-match Test series, which starts on July 24, to be “a real arm wrestle”.

Gatland said he was proud of the way his team came back from 17-3 down at half-time.

“We finished the stronger team and they wilted a bit,” said the New Zealand-born coach.

He also believed the result could easily have gone the way of the Lions.

“We got over their line a couple of times and had two tries disallowed and we had a kick charged down which enabled them to score a try. There were also one or two decisions which did not go our way.”

One of those decisions was a yellow card to South African scrum-half Faf de Klerk shortly before half-time which Gatland thought was “definitely” contact with the head and could have resulted in a red card.

Gatland said he was pleased with the way the Lions stood up to a powerful South African pack in the scrums, but acknowledged that they needed to work at improving their breakdowns play.

He also said the Lions had not given away all their secrets during a bruising encounter.

“There are some plays that we have been working on and we will keep working on them leading up to the Test matches. It’s important to keep a few things back.”

Gatland said the issue of the tour captaincy would be discussed when originally-appointed captain Alun Wyn Jones arrives in Cape Town on Thursday.

Scrum-half Conor Murray, who led the Lions on Wednesday, was given the tour leadership when lock Wyn Jones was ruled out because of a shoulder injury from which he has since recovered.

“We will sit down with him and Conor and decide,” he said.

Murray suggested he would be happy to hand over.

“I want to win the Test series and Alun has proved that he is a great leader,” he said.

Murray said he was pleased with the way the Lions fought back.

“We discussed a few things at half-time and you saw how things went in the second half. I would have loved to win, but I think we can be proud of our effort.”

'I need to write a new story' at Toulon, says Springbok star Kolbe
15 hours ago
15 hours ago

'I need to write a new story' at Toulon, says Springbok star Kolbe
15 hours ago
15 hours ago