Springboks have a new coach … and he’s still playing!

He might not be actually getting any game-time but Beast Mtawarira assures all that all the players 'enjoy' this on-field mentor. 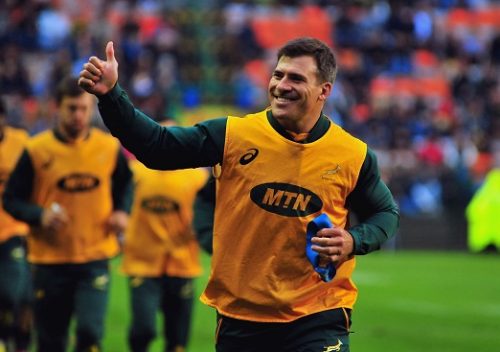 If some Springbok fans were concerned that Schalk Brits is a passenger in the national squad, they need not worry.

Even though the popular 37-year-old hooker, who earlier this year ‘retired’ after years of stellar service for English club Saracens, is unlikely to play in the current Rugby Championship campaign, he’s adding value … as coach!

“He’s made a massive impact. He’s one of the coaches!

“He’s really been a big help to the guys in the side. It’s something really special, that mentoring characteristic he has. He just wants to help the team do well,” said the 33-year-old prop.

Brits is currently club-less though though speculation is rife that a short-term contract with a Super Rugby franchise is planned for him to stay match fit ahead of next year’s World Cup.

Yet Bok coach Rassie Erasmus clearly isn’t too worried about him taking up a spot in the squad without getting game-time.

“He’s always helping the hookers, offering them some additional information. It can be anything, from his knowledge of the opposition to something specific he has seen or picked up,” said Mtawarira.

“Even the guys in the backline get some advice. That’s Scalla, he’s got an all-rounder brain. He knows the game very well.”