Jovial Ramaphosa jets off to Japan to give Bokke some Vuma!

The team won the previous two finals in which they competed - in 1995 against the All Blacks and in 2007 against England. 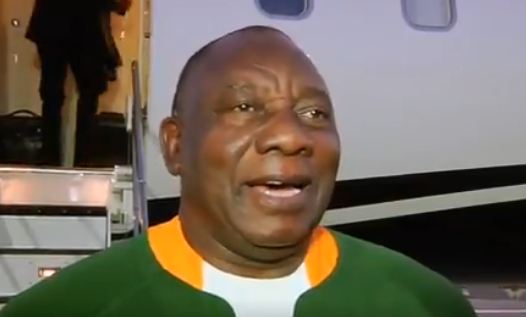 So said a jovial President Cyril Ramaphosa as he boarded a plane headed to Japan to support the Springboks in their Rugby World Cup final duel with England on Saturday.

Kitted out in a number 6 jersey, to mirror that of captain Siya Kolisi, Ramaphosa beamed as he predicted a victorious outcome for the Boks.

He called on all South Africans to hold a moment of silence or prayer at 1pm on Friday in support of the boys in the green and gold.

Parliament’s presiding officers meanwhile had a message of their own: “Go Bokke!”

“South Africa’s moment has arrived”. President @CyrilRamaphosa has urged all South Africans to wear their Springbok rugby jerseys and at exactly 13h00, pause for a moment of silence, and those in their cars blow their horns and make the @Springboks feel our presence. #RWC2019 pic.twitter.com/Jtt7GS6Y53

This is the message Parliament’s presiding officers – National Assembly Speaker Thandi Modise and chairperson of the National Council of Provinces Amos Masondo – had for the Springboks on the eve of their third Rugby World Cup final.

The team won the previous two finals in which they competed – in 1995 against the All Blacks and in 2007 against England. They face England again on Saturday.

In a statement, Modise and Masondo wished the Springboks well for the match.

“The Boks, as they are fondly called, will be carrying South Africa’s hopes and aspirations when they enter the Yokohama Stadium in Tokyo, Japan, in their quest to win this ninth edition of the Rugby World Cup,” their statement read.

“We wish to assure captain Siya Kolisi and the whole team of our national unity in support of their efforts to conquer the world of rugby and bring home the coveted Web Ellis Cup for the third time.

“We cherish the team’s resilience, fierceness, unity and strength, which has seen it conquering some of the greatest challenges to inspire South Africa and the world and to position itself on the verge of yet another world glory.

On Thursday, President Cyril Ramaphosa also wished the Springboks well before he answered questions in the National Assembly.

“Captain Siya Kolisi, coach Rassie Erasmus and their team have played with grit and determination to get to this point, and when they step out onto the field in Japan tomorrow, they carry the hopes of the nation for a third World Cup trophy win,” Winde said in a statement.

“The 2019 Bok team have shown us the values of commitment and teamwork and have united fans in their love of the sport.”