With first choice No 9 Faf de Klerk injured, could a recall to the Springboks be on the cards for Ruan Pienaar? 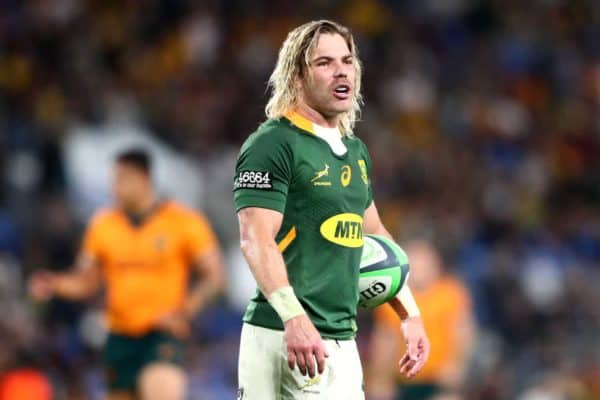 With Faf de Klerk injured and likely to miss the Springbok Tests next month, the selectors have much to think about regarding the scrumhalf position. Picture: Chris Hyde/Getty Images

The Springboks are gearing up to head off for their November end of year tour to the UK, with the team expected to fly out of South Africa at the end of next week.

The South African based players have been enjoying a well deserved break with their families after they spent over four months in a bubble secure environment after joining together in June ahead of the Lions Series, before moving straight into the Rugby Championship.

Having enjoyed a rousing 2-1 series win over the Lions the Boks were then brought back down to earth in the Rugby Championship after winning their opening two games against Argentina, they went on a three match losing streak, going down twice to Australia and once to New Zealand.

However they bounced back superbly to win their final match against the All Blacks and they will take a lot of confidence from that performance into the UK tour where they will face Wales, Scotland and England.

Injuries will be a concern for the Bok selectors with a number of key players such as flank Pieter-Steph du Toit, lock RG Snyman and prop Frans Malherbe all ruled out through injury.

Question marks then remain over the availability of scrumhalf Faf de Klerk who may need surgery on a hip injury which would see him ruled out of the tour, which along with the unavailability of Jaden Hendrikse, who made his Bok debut against Argentina and fractured his leg, would leave a conundrum at scrumhalf.

Herschel Jantjies and Cobus Reinach would most likely be the senior scrumhalves in squad and although uncapped Sharks No 9 Grant Williams was called up to the Bok squad as cover, one wonders if Ruan Pienaar might be looked at as a possible third choice with his vast experience and current good form.

Another injury concern will be over blockbuster wing Cheslin Kolbe, who did not recover from his knee injury during the Rugby Championship and has not yet featured for new side Toulon.

The squad announcement will be made on Tuesday, with a large 38-man squad expected to be named for the tour.

The team was originally set to fly to France to isolate for 10 days ahead of entering the UK, however with South Africa having being taken off the red list, the Boks may be able to fly straight in to the UK now without the threat of having to isolate for two weeks.

Saturday, November 6 v Wales at the Millennium Stadium in Cardiff