A win at the home of English rugby will give the South Africans a clean sweep of victories in the UK this year. 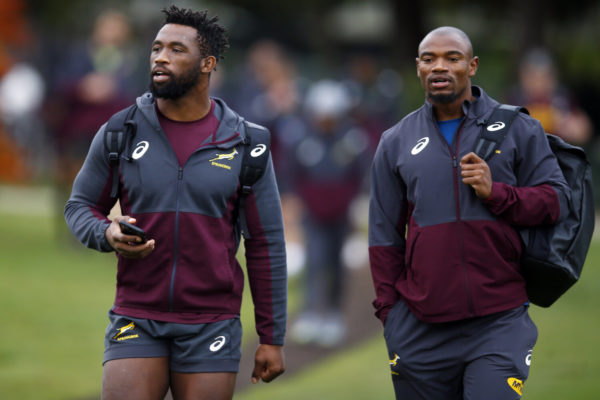 Siya Kolisi (captain) of South Africa walks with Makazole Mapimpi at training ahead of this weekend's crunch game against England at Twickenham. Picture: Steve Haag/Gallo Images

The Springboks are fired up for a special challenge as they take on England in their final end-of-year-tour match of the season at Twickenham on Saturday afternoon (kickoff 5pm), looking to end their year with a clean sweep in the UK.

It has been a difficult season with the highs of winning a Lions series and beating the All Blacks, tempered by the lows of losing twice to Australia and ending the Rugby Championship third.

But the team have enjoyed an unblemished UK tour so far, with powerful wins over Wales and Scotland and the players will be eager to claim another big scalp of England and seal a first clean sweep on an outgoing tour since 2013.

“Playing against England is special and is always tough because they bring it. They are an all-round team, they have a good kicking game and attack very well with different options and now they’ve got some new guys who are getting opportunities,” admitted captain Siya Kolisi.

“We were there a couple of years ago and we know how exciting that is to get your chance. They also have a really good spine of experienced players who have played a lot of games, so it is going to be a big challenge against them.

“Every time I have played England it’s always intense and it often goes down to the wire, so I am really looking forward to it. Also playing at Twickenham is a special thing. I think it is only my second time playing against England at Twickenham and we want to make sure we perform wherever we go.”

Despite a very disruptive build up to the game with World Rugby suspending Director of Rugby Rassie Erasmus on Wednesday, the Boks will have plenty of motivation heading into the weekend’s clash and will have a lot to prove.

Although the England team is a little inexperienced with a young flyhalf and a rookie front row, the Boks know that they will still need to be at their very best if they want to emerge with a win and they will give their opponents the respect they deserve on the day.

“They are a very good team and a strong side. They have some special players, we have a lot of respect for them and we know it is going to be tough at Twickenham,” said assistant coach Mzwandile Stick.

“I know for sure that they have got pride in what they do and the jersey that they’re wearing, so it is going to be a tough game for us. The key thing is to focus on what we can do better and make sure we can continue making the South African people proud.”