'When he comes to the national team, he has to play, he is too important,' said Hugo Broos. 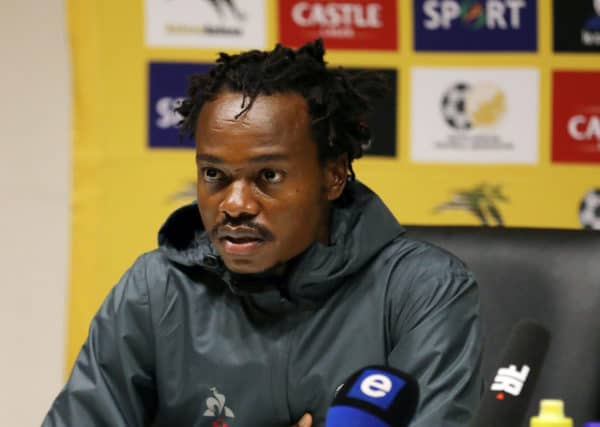 Percy Tau is out of next month's World Cup qualifiers. Picture: Muzi Ntombela/BackpagePix.

Bafana Bafana will have to play Ethiopia in back to back Fifa World Cup qualifiers next month without striking talisman Percy Tau, who is still coming back from a hamstring injury at Egyptian giants Al Ahly.

This was confirmed on Monday by Bafana Bafana head coach Hugo Broos, as he named his final 23-man squad for the Group G games against Ethiopia in Addis Ababa on October 9 and the return match in South Africa two days later.

“Percy Tau is injured … he had an injury in the last game against Ghana (Bafana won 1-0 at the FNB Stadium back in September). He went back to his team, he didn’t train, he didn’t play. He started training last Friday,” explained Broos on SABC Sport, where he unveiled his squad.

“I spoke to him and asked him what is happening. So I think he is not ready. When he comes to the national team, he has to play, he is too important.

“You can’t say a player that is not training can be on the bench. What if he comes in and gets another injury. He will try to be ready  for the next month (November, when Bafana finish off their World Cup qualifiers against Ghana and Zimbabwe).

“Maybe that (November) will be more important.”

Broos named only one overseas-based player for the games against Ethiopia, Israel-based Siyanda Xulu, showing his faith in locally-based stars, though that is also by necessity as well as choice.

The Belgian admitted that Covid-19 issues prevented him from picking Portugal-based Siphesihle Sithole and Thibang Phete, while passport problems have got in the way of him selecting Denmark-based Luther Singh.

Broos has mainly kept faith with those that did so well to get four points against Zimbabwe and Ghana in September, though there are also some new faces that have made the cut, with Kaizer Chiefs left back,Sifiso Hlanti in the squad, as well as Orlando Pirates’ pair Tshegofatso Mabasa and Goodman Mosele in the squad, even though a Bafana assistant coach was turned away from the Buccaneers’ meeting with Mamelodi Sundowns on Saturday.