Broos delighted with Bafana grit in win over Ethiopia

'It was a difficult game on a very difficult pitch,' said the Bafana head coach. 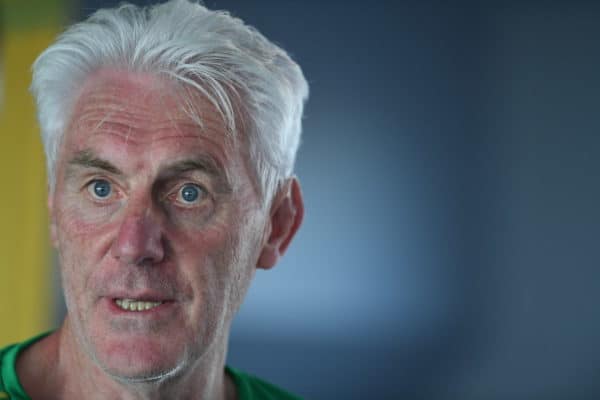 Hugo Broos praised Bafana Bafana’s appetite for the battle after they picked up a vital three points in Fifa World Cup qualifying with a 3-1 win over Ethiopia at the Bahir Dar Stadium on Saturday.

Bafana looked on the ropes after Getaneh Kebede equalised for the home team in the second half, but goals from Mothobi Mvala and Evidence Makgopa sealed an important away win in Group G. This victory was also achieved on a playing surface that Broos was far from happy with, making it difficult for either side to play their usual passing game.

“It was a difficult game on a very difficult pitch,” said Broos.

“I said before the game that we don’t need a trophy for the best football playing team, we need the trophy for the team with the most character. We showed that character and mentality even when Ethiopia equalised. We fought for every ball and we won at last, and it is a great win.”

“I don’t understand Ethiopia coming to play an important game on this pitch,” added the Bafana coach.

“It is also not good for them. They are also a team that plays football and not kick and rush. But on this field you can do nothing else.”

Bafana Bafana were set to return home immediately after the game in Bahir Dar, as they now prepare for another game against Ethiopia, this time at FNB on Tuesday. With home advantage, Bafana will be clear favourites to seal another three points that would put them in an excellent position to seal top spot in the group, heading into the final two Group G qualifiers in November.