Baxter sees light at the end of the tunnel for Chiefs

'I hope the supporters stick with us and they understand the journey that we are on,' insists the Amakhosi head coach. 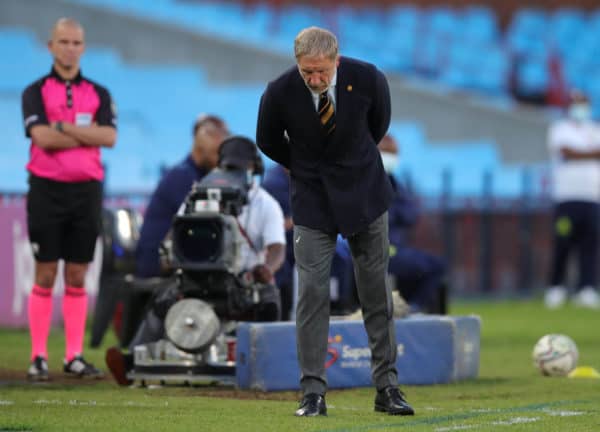 It's been a faint start to the new season for Kazier Chiefs, but coach Stuart Baxter insists they will soon have it together. Picture: Samuel Shivambu/BackpagePix

All Stuart Baxter needs to get Kaizer Chiefs into an all-conquering unit again is time, but does he have it? Baxter has often spoken about how he wants his team to play but it has not come out in their recent performances.

Well, that’s at least according to the club’s supporters, some of whom have already lost faith in the Brit and called for his head.

But in all fairness, there have been times where Amakhosi have shown glimpses of becoming a dangerous side.

“I hope the supporters stick with us and they understand the journey that we are on. I think there is enough happening to encourage us to believe this could be very good if we can just shift that ten percent,” said Baxter recently.

But the shift seems to be difficult to achieve and with six games in the DStv Premiership gone already, Baxter is yet to find his solid starting XI.

He has insisted on a new system that uses an extra central defender as cover in the midfield and has struggled to find someone to fit in that role.

He has previously used Njabulo Ngcobo once and he swam and was replaced in the following match. He also tried Austin Dube and he had a horrendous game and was left out of the following game.

Baxter is hopeful and seems close to finding his man in Ngcobo who he says did well in the role in their last game against AmaZulu FC.

“We went back to a 4-3-3 and we used Njabulo Ngcobo in a new role. At times he showed he has got qualities in that role and he released Cole Alexander and Phathutshedzo Nange to get higher in the box. We did get more bodies in the box, which is something we spoke about, when crosses were coming in we were getting on the end of them.”

Baxter will have had more time to get his players gelling with the international break, but Ngcobo is out with Bafana Bafana and there is not much he could have done to fastrack him in his new role.

Chiefs’ next game is on Saturday when they host Chippa United at FNB Stadium for a league encounter.